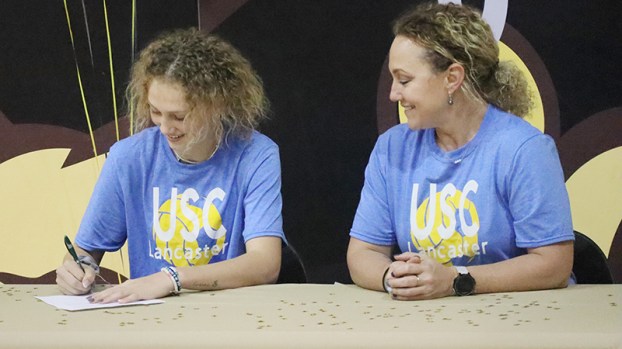 Nederland’s Rylee Bolser, left, signs a letter of intent at the Dog Dome Wednesday to play soccer and volleyball for the University of South Carolina Lancaster. Chris Moore/The News

NEDERLAND — Another Nederland Bulldog signed a letter of intent Wednesday to play sports at the collegiate level. Rylee Bolser will play volleyball and soccer at the University of South Carolina Lancaster.

The multi-sport athlete signed her letter of intent in the Dog Dome.

“Her journey here is not done yet,” he said. “We are going to try and get all we can get out of her. Hopefully, soccer will go all the way to the state championship. She has another chapter of her life starting not so close to home, but in a beautiful place. We are excited that she will be representing Nederland High School.”

Nederland volleyball coach Allie Crommett said she is proud of how much Bolser has grown as an athlete and leader on and off the court.

“I can say that from our relationship; we’ve seen some ups and downs and she always comes out stronger then what she started,” Crommett said. “I feel like with her legacy here, she left it better than she found it.”

Bolser is excited to play at the next level even though the distance from home makes her a bit anxious.

“I want to get away, but it is leaving everyone and being so far,” she said. “It is farther than A&M and other stuff in Texas.”

Bolser said Lancaster was the only school that offered her an opportunity to play volleyball and soccer.

“I’ve always dreamed of it, and this opportunity came where I could go for both and it made me want to do it,” she said. “I love volleyball and soccer. I can’t choose between them, which is why this offer stood out the most.”

The Bulldog said her favorite memory was when her volleyball coach was hit in the head with a ball during a game.

“It was pretty funny,” Bolser said. “It was either my sophomore or junior year. We were picking up the balls and one of the other players was throwing it to someone under the basket and our coach just happened to walk by at the time.”

She said her favorite team memory was making it to the second round of the playoffs this past volleyball season.

Bolser and her teammates on the soccer team are 9-3 on the season.

The Nederland Bulldogs clinched a playoff berth with a 56-50 win over Memorial Tuesday night. The loss for the Titans... read more