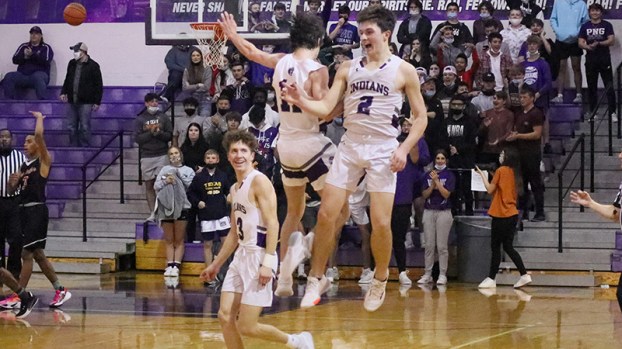 PNG needed to win out and have some help in order to sneak into the District 21-5A playoffs. While the Indians’ season came to an early conclusion, head coach Chris Smith said his players have no reason to hang their heads.

“That was one of those games where one team had to lose,” he said. “We made a late turnover and they made a shot. Our kids put it on the line and played as hard as they could. They did everything I asked them to.”

After falling down 13-18 after the first quarter, the Indians lit up the scoreboard in the second to give PNG a 30-27 lead at the half.

The two teams exchanged leads in the third. With just under four minutes left in the game, a couple of offensive rebounds and put backs by Maleek Jones extended the Titans’ lead to 49-42 with 3:53 left in the game.

PNG’s Grant Pearson capped off a 7-0 run by sinking a free throw to tie the game.

The Indians had a chance to take a late lead but an errant pass fell out of bounds, setting up Willice’s game-winning jumper.

“Brady (Nail) was just hitting his stride from an ankle injury that he got earlier in the year,” Smith said. “He was looking like the Brady of old. That was the Brady we were expecting. Grant has exceeded our expectations all season.”

Pearson and Nail finished the game with 16 and 13 points, respectively. Memorial’s Keandre Jones led all Titans scorers with 15 points, including four threes. Maleek Jones finished with 14.

Smith said Pearson held his own against some of the district’s toughest competition. “Outside of Maleek, all of the guys Grant faced were one-sport guys who just played basketball,” Smith said. “That shows how hard Grant has worked. He came right off the football field and competed against one of the hardest districts and some of the best big kids he can go against. He’s outplayed a lot of them.”

Like many schools PNG dealt with football players arriving to basketball late due to the football season being pushed back during to the pandemic. The Indians also dealt with two players testing positive and being out for a couple of games.

“I’m just happy we had a season,” Smith said. “In the grand scheme of things, these kids got to play basketball. I’m happy they got to enjoy a season. We were not guaranteed one. It might not have been the season we thought we were going to have but we played some great games and competed against some of the best teams in the state. We cannot hold our heads down for anything. We went against the best and competed with the best.”

“That is the funny thing about this group,” Smith said. “I was actually at C.O. Wilson Middle School when they were in the seventh grade. I actually coached against these kids as seventh graders and I coached against them when they were ninth graders. I’ve been a part of this group as if I had been here for five years. They are great kids. We have fun in practice and talk a lot of trash to each other. They know that I graduated from Nederland. At the end of the day, we have each others backs.”