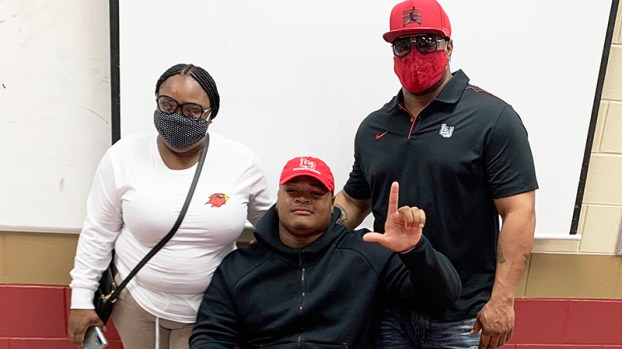 Tre’Vonte Caines signed a letter of intent this week to play for the Lamar University Cardinals. Courtesy Photo

Center Tre’Vonte Caines signed a letter of intent to play for the Cards next season.

He helped lead the Titans to the first undefeated regular season in school history and played a key role in the No. 1 offense in District 9-5A Division I.

While Caines has played all over the offensive line throughout his time at Memorial, Titans head coach Brain Morgan said the senior was recruited to play defensive line, which is his true passion.

“That is always what he wanted to play,” Morgan said. “He really set aside individual wants for team goals. He really is a team guy and understood he was were we needed him to make our team good. He did it really well. That is something that the young guys can really look at as someone who put the team over himself.” 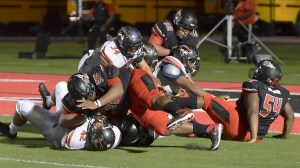 Caines was a four-year varsity player for Memorial.

“I’d have to count how many games he has played but it is close to, if not more than 40 games of varsity football,” Morgan said of Caines. “He has been a steady presence for us. Not only is he a sturdy player and strong, he is a steady guy. He has played hard and is going to be a good football player at the next level.”

As a guard in his sophomore and junior season, the Titans pulled him often as a lead blocker for the runners in the backfield.

“He’s a super athlete,” Morgan said. “He is a guy who was a running back in middle school and played fullback his freshman year. He is a guy that is that same athlete, but his body grew into a lineman’s body. He is a really talented shot put guy and has a chance to go to state. He is really athletic and explosive. We watch him mess around out there and catch and throw. He definitely has the skillset of a skill football player, but his body just grew that way.”

Morgan hopes the signing paves the way for more local talent to end up in Lamar jerseys. He said Caines will be a great representative for the city and the program.

“Hopefully this is a good deal to open up a pipeline,” Morgan said. “Tre’Vonte is going to go and do the right things. He is going to work his butt off and not cause any problems. He is going to be coachable. You would hope that him going there creates another opportunity for future guys here. You hope down the road, (Lamar) can see they can go down the road to Port Arthur and get, not only a really talented guy, but a high-character guy that will do the right thing.”

PORT NECHES — A late three by Bryton Willice gave Memorial a 52-49 win over Port Neches-Groves on the road... read more