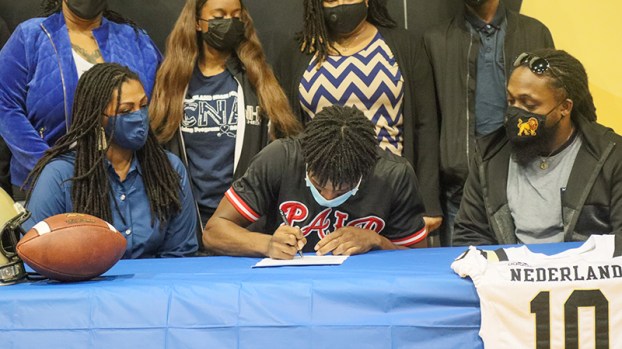 Running back Josh Mazyck signed to play with Blinn Junior College, while defensive lineman Jose Fuentes signed with the University of Mary Hardin-Baylor, which is a Division-III school.

Both players signed their respective letters Wednesday during an event held at in the Dog Dome at Nederland High School.

Mazyck finished the regular season second in the district in rushing yards with 1,251 on 143 carries and 18 touchdowns.

Mazyck said he was happy to continue playing.

“It feels good to know that I can continue my football career,” he said. “I feel like Blinn is the best fit for me right now. I will be able to learn, get bigger and start my recruiting process over.”

Fuentes said the day was “special.”

“I worked really hard for this,” he said. “It is a great opportunity that they gave me. They gave me a chance to play again.”

Mary Hardin-Baylor, which is located in Belton, won the D-III championship in 2016 and 2018 and were runners-up in 2004 and 2017. The Crusaders vacated their 2016 title after an investigation revealed a coach let a player use his car for 18 months. The program is still widely considered a powerhouse of the D-III level.

“They have a tradition of winning,” Fuentes said. “That is what they are all about, and that is what we are all about over here in Nederland. It feels good to go somewhere like that.” 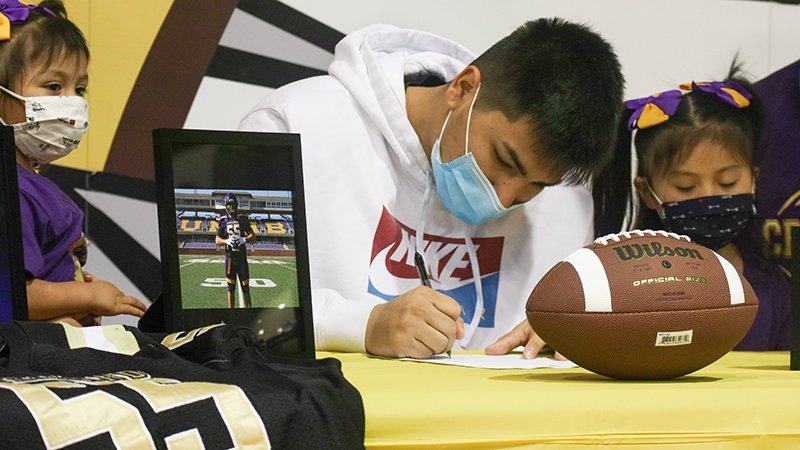 Mazyck said he is going to miss the home games at Bulldog Stadium.

“Just playing and putting on the jersey and having that ‘N’ on the side of your helmet is a different feeling,” he said.

The running back also said he will miss participating in Mid-County Madness.

Fuentes said his favorite memories have been the 41-35 overtime win against Barbers Hill this season and the 29-24 win over Crosby in the district finale. Crosby went on to play in the 5A-II state championship game.

“This whole year was good,” Fuentes said. “We worked hard for what we got.”

Both seniors were contributors to the Bulldogs 9-3 season, which ended in the third round of the playoffs.

“We are excited that they are going on to represent us and their families,” Nederland head coach Monte Barrow said. “I can’t say enough about what they have meant to this program over the last four years. It’s not an accident that both of these guys are up here.”

Barrow said both players led the team with their work ethic and play.

“They led this team to a special season that I know they will never forget,” Barrow said. “I couldn’t be more happy to see the payoff for them and am excited to see what is in their future.”

Braden Bailey knocked some competitive rust off with a solid showing Monday and Tuesday in the North Texas PGA Players... read more