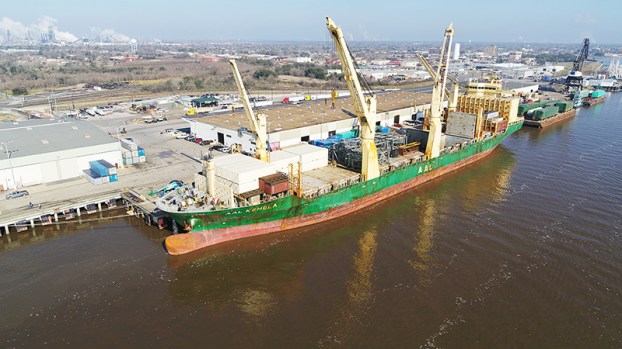 Despite all the challenges related to the pandemic, global economic recession and disruptive nature of Hurricanes Laura and Delta, the Port of Port Arthur has remained resilient.

Looking back at 2020, the Port set a record for jobs, diversified its cargo portfolio and continued its expansion.

In the 4th quarter of 2020, the port set a new record for the number of labor hours worked. As a job enabler, there are several ways the port creates jobs — mainly by marketing the port to attract customer cargo and providing transportation related services.

Our customers are key and essential to local job creation and sustainability. Customer decisions are driven by quality of service, productivity and price. To unload and load the breakbulk cargo the port engages a contractor, in port speak, known as a stevedore.

The stevedore in turn hires the local longshore labor. For October, November and December those work hours averaged around 120 jobs per day per month — a record for the Port of Port Arthur.

With only 19 direct port employees, port staff has significant responsibility. In sum, the Port of Port Arthur delivers on approximately 250+ direct jobs in Port Arthur. There are many more indirect construction and transportation jobs related workers involved with the port.

Despite the challenges in 2020, the port delivered the goods on jobs and economic development for Port Arthur with almost 200 ships calling on the port. After setting year over year tonnage records, 2019 to 2020 overall tonnage had a small dip of about 4 percent, a testament to the resiliency of the port in these difficult times.

This was largely due to a decrease in diesel exports, partially due to COVID impacts, but mainly due to the disruptive nature of Hurricanes Laura and Delta. While damage to the port was relatively minor, back-to-back storms disrupted waterway activity and reduced some cargo movement.

Several cargos such as imported pulp used to produce tissue, paper towel, medical and hospital single use materials were up 46 percent. Based on 2020’s data, the port moved an estimated $1.7 billion in relative retail value in its intermediate form.

The port moved enough lumber to various places in Texas for new construction and in support of Louisiana recovery efforts to build more than 13,000 homes at a retail value of $400 million. As a designated Strategic Port, 11,000 plus pieces of military equipment moved through the port supporting our nation’s military.

Port tenants such as a shrimp processing facility move approximately 25 percent of the state’s domestic product of shrimp 100+ Port Arthur jobs. Another tenant moved enough renewable energy biomass in the form of wood pellets to heat over 75,000 homes with 30 workers in Port Arthur and hundreds of jobs in East Texas.

Yet another Port Arthur tenant-employer exported over 25 million barrels of ultra-low sulfur diesel to points around the world, all from the Port of Port Arthur. Through yet another business relationship with a local shipyard has another 100-200 jobs on a regular basis.

Other highlights for 2020: The port commission approved a staff developed written policy for local, woman, minority, veteran, disabled veteran owned businesses. While the port has historically and actively engaged local and Historically Underutilized Businesses, HUB an expanded and written policy is in place to increase supplier diversity.

Approximately 25 percent of the businesses engaged with the port are defined as local, from the Port of Port Arthur Navigation District and 47 percent from Jefferson County. The Port received an approximately $10 million Port Infrastructure Development grant to improve existing port facilities.

In the past three years, the port was awarded more than $37 million in competitive grants to expand port infrastructure. The port’s annual fiscal audit for FY19-20 was completed ahead of schedule and reflects the port’s sound financial management.

The Port of Port Arthur also rolled out its new logo and enhanced branding of the port including the message, “Where Opportunity Docks!”

Port President Norris Simon said he is most proud of all the port workers, professional staff and fellow commissioners.

“Throughout the various COVID challenges, the port has been here for the community working every single day,” Simon said. “Providing the jobs and delivering the goods that that take care of our community, state and nation.”

Looking to 2021, I am cautiously optimistic. Project cargo, military and traditional forest product volumes are strong.

The port has added two new customers in the first weeks of 2021. In the next few months, we look forward to completing our first phase of berth construction and rolling into the next phase.

To meet the increased dockside capacity, the port is actively working to increase its landside capability.

Given the diversified cargos there are several projects to increase the port’s ability to stage cargo for shipment.

Larry Kelley is Port Director/CEO at the Port of Port Arthur. He can be reached at larry@portpa.com.

NISD student athletes nominated for scholarships; see how you can help them win $1,000