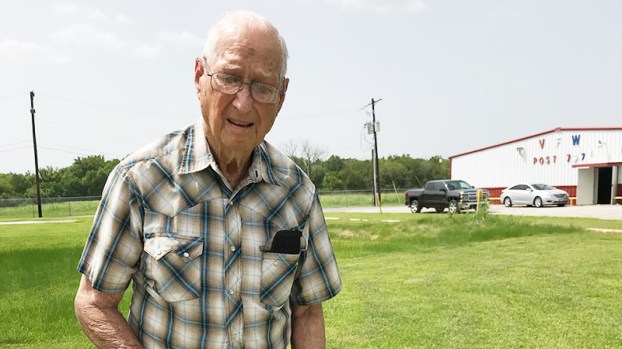 I met David Williams for the first time three weeks ago.

He moved well, had a sharp mind and was intensely focused on an issue he felt I needed to know about because of my role with the Port Arthur News.

Mr. Williams wanted a largely forgotten World War I marker and monument returned to permanent placement at the Seawall in Port Arthur.

He told me he feared the issue would forever fall by the wayside should he pass away.

Unfortunately, Mr. Williams died shortly after our initial conversation. He was 97 years old when he passed away Tuesday (Jan. 26).

Although I only met Mr. Williams once, my memory of our conversation and his passion will not soon be forgotten.

Longtime readers of the Port Arthur News and panews.com might think Mr. Williams’ name and passion sound familiar. That’s because his story has been told many times in our pages.

Mr. Williams was born in Mexia. He retired from Texaco and was in the U. S. Navy, serving during WWII. He was a member of St. Therese Little Flower Catholic Church in Port Arthur.

A gathering of family and friends will be held Feb. 6, 2021, from noon to 1 p.m. at Melancon’s Funeral Home in Nederland with a Memorial Service being held at 1 p.m.

Due to COVID-19, friends and relatives are asked to social distance while attending his visitation. Guests are required to wear a facemask.

Before his death, Mr. Williams told readers that Port Arthur citizens dedicated a plaque to honor World War I veterans in 1932.

The Hamilton Smith Post 797, Veterans of Foreign Wars — named for a Port Arthur man who died in WW1 — sponsored the plaque, which was dedicated on May 30, 1932.

The plaque’s message honors “The United States Military, Naval, or Marine Forces in the world war …” It didn’t honor the U.S. Air Force because there was none then, specifically. It didn’t reference “World War I” because World War II had not been fought and was not anticipated.

The plaque and those who died in WW1 forever remained precious to Williams, who himself joined the Hamilton Smith Post locally in 1955.

“It was a big group,” he recollected of the post, which started with a ladies auxiliary in 1928 and has been defunct since 2015. Williams can remember when there were more than 200 members, when “we had bingo going,” according to a story reported by former News editor Ken Stickney.

The plaque, presented on granite, once rested where the north gate now stands on the seawall, a stone’s throw from Rose Hill. But the post wanted the marker to follow them to its new post quarters on Main. It rests there now, behind a chain link fence, inaccessible to the general public.

DD7 leadership once suggested moving the monument to where it would not penetrate levee space and not violate U.S. Corps of Engineer restrictions — possibly a spot at the end of the boulevard, near the toe of the levee system.

County commissioners also talked about accepting it on behalf of the Veterans Park, 7626 Gulfway Drive, which fronts Highway 73 near the Veterans Bridge.

Although I know he tried, 100 years was a milestone Mr. Williams never reached himself.

During his lifetime, he served our country, worked in a local refinery and raised a family. He gave a lot, and he did so until the end.

BEAUMONT — The Jefferson County Commissioners Court has appointed Edreauanna Fowler to the Spindletop Center Board of Trustees. She is taking the seat left vacant... read more