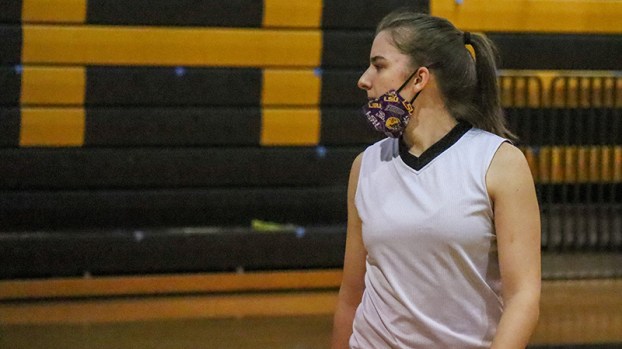 NEDERLAND — Kailey Showalter is one of several Nederland players putting the team in the thick of the District 21-5A playoff hunt.

“She can do it all,” head coach Jody Walker said of the senior. “She can guard (every position) on the court. She is a good ball handler and has a very good mid-range jump shot. She sees the court well, too.”

Showalter enjoys grabbing rebounds and starting the fast break to set up others to score in transition.

She developed her skills by playing on varsity early in her high school career.

“She was forced to play up as a sophomore and freshman with the varsity,” Walker said. “She is coming into her own. She just had to learn a new offense from last year. She has really gained confidence.”

While her coach describes her as “shy” and “quiet,” Showalter said she enjoys joking and playing around with her teammates.

“I think my friends would describe me as goofy and a jokester,” she said. “Most of my (favorable) memories come from practice. They come from being silly and then serious. I love the bonding.”

Showalter thinks her teammates have come together well this season to create a strong bond.

“We know who knows what to do,” she said. “We’ve really gotten to know each other. It has been fun.”

Led by a competitive desire, the basketball player said she gets her knack for competition honestly.

“My mom is probably the most competitive out of the family,” she said. “I think that is where we all get it from. We usually have family game nights and that is when her competitive side comes out.”

When not on the court, Showalter enjoys studying economics.

“After college, I plan on owning my own business,” she said. “Coming from that, it has been a really interesting subject. I’m planning on having my own thrift store with one of my good friends.”

The senior said she enjoys Algebra the least.

“I still like Algebra,” she said. “If I had to choose, it is my least favorite.”

According to Walker, Showalter is a model student— one of those players coaches love to have in the program.

“She is more of a leader who leads by example,” Walker said.

NEDERLAND — The Beaumont United Timberwolves completed the season sweep of the Nederland Bulldogs with a 51-29 win at the... read more