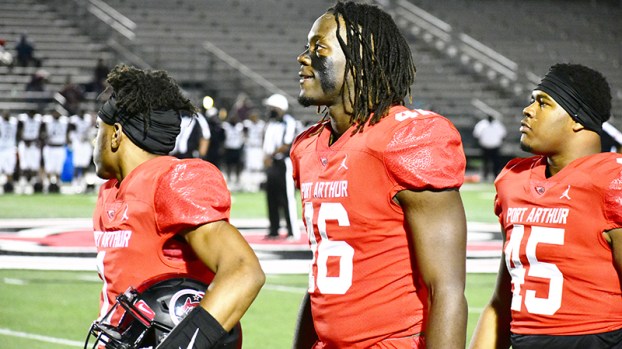 Thomas was the anchor of a dominant Memorial defense that played a key role in the Titans’ first undefeated regular season in school history.

Thomas signed a letter of intent in December to play football at the University of Texas next season.

While the senior stands at 6’4”, 260 lbs., coaches said Thomas’ work ethic is what separates him from the rest.

“Jordon has worked hard since he has been here,” Memorial defensive coordinator Korey Mangum said. “It was a great award for him, especially with all of the work he has put in coming off injuries in his junior year.”

“That says a lot about his character,” Mangum said of Thomas’ comeback season. “He’s the type of kid you have to kick out of the weight room. He has that type of mentality.”

That level of dedication is still evident even after Thomas has played his last snap in Port Arthur.

“He’s running track and doing powerlifting now,” head coach Brian Morgan said. “All of the awards he has and his situation, he put himself in. I don’t know that we have done a whole lot for him. He put himself there. He has really buckled down this last year, improved his academic situation and put himself in good shape to go to Texas in the summer.”

Morgan said he has not seen many like Thomas.

“He works really, really hard,” Morgan said. “We have other guys that work hard, but he practices really hard. Obviously, he is blessed genetically, but he loves to practice. I told him wherever he goes, he is going to make it. No matter what is going on in his life, when practice comes around, he is in a great mood.”

The defensive end’s athletic capabilities are also on display on the track, Morgan said.

“There are not many 6-foot-4, 260 lbs. guys running sprints,” he said. “Not a lot are doing that. He and I had a conversation a week ago about having a different mindset than everybody. He is set up now. He is going to Texas. Now, his mindset is preparing to play in the NFL. They are going to do a good job at Texas of putting him in that position.”

PORT NECHES — Late rebounds and free throws lifted Nederland to a 38-30 win over the Indians at Port Neches-Groves... read more