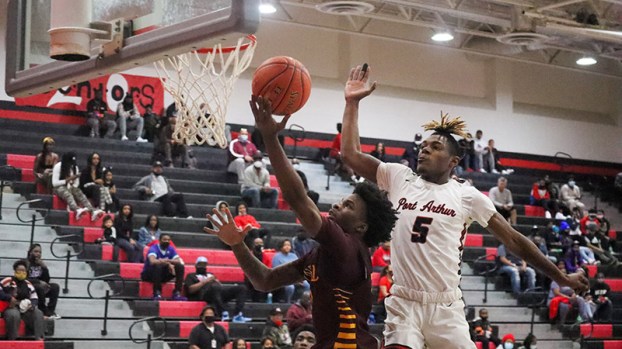 Memorial’s Maleek Jones (5) soars for a chase-down block in the first half of the Titans’ 73-43 loss to Beaumont United at Memorial Stadium Tuesday. Chris Moore/The News

Lewis: Titans playing hard despite loss to No. 2-ranked BU; key is to continue fighting

Despite a 30-point loss to Beaumont United, Memorial Titans head coach Alden Lewis praised his team’s effort throughout the game.

The Titans dropped a 73-43 contest to the No. 2-ranked Timberwolves at Memorial Stadium. After the game Lewis gave credit to BU and hopes his team keeps the same energy moving forward.

From tipoff to final whistle Tuesday night, the Titans appeared outmatched, going down 23-8 in the first quarter. United’s effective trap forced Memorial wayward passes that wound up in the hand of streaking BU players, who consistently found their way to the rim on fast breaks.

The Timberwolves’ length bothered the Titans, who struggled to find passing lanes and seemed hesitant to attack the basket.

Memorial was able to get the crowd going on a few plays. The most notable play for the Titans came in the first half when United’s Kendris Henry attacked the rim, only for Memorial’s Maleek Jones to sky in for an emphatic block, but the emotion of the play was not enough to propel his team forward.

At halftime the Timberwolves had built a comfortable 40-16 lead.

After the break, Beaumont United kept its foot on the gas, outscoring Memorial 22-12 in the third.

Henry and BU’s Terrance Arceneaux led all scorers with 21 and 18 points, respectively.

“I told my kids at halftime that we just have to fight and continue to play the game,” Lewis said. “We will move on and prepare for the next game. You can’t sulk. You have to move on. We have a second half of district. We have been facing a lot of adversity. Regardless of adversity, we have to keep fighting. No matter what the score is, we have to keep fighting until the horn goes off.”

The Titans play Barbers Hill Friday. Lewis said he is looking forward to the game to get the bad taste out of his team’s mouth.

Tipoff is set for 7 p.m. in Mont Belvieu.

The Memorial Titans were no match for the Beaumont United Timberwolves at Memorial High School on Tuesday night. The No.... read more