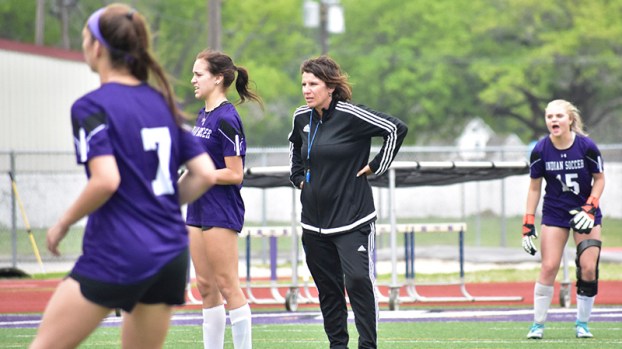 The Port Neches-Groves Indians swept through the Cajun Classic in dominating fashion this weekend.

Head coach Aimee Bates said her team’s most impressive performance was a 4-0 win over Dobie.

“We just played beautiful, possession-styled, tiki-taka soccer,” Bates said. “We scored some beautiful goals and just came out with a gusto. We were organized defensively and were smart with the ball on our feet. The whole team contributed and had moments of greatness.”

Bates said she enjoys coaching in tournaments, because it allows her to experiment with the lineup.

“I know they took tournaments away from volleyball and basketball, and I hate that for them,” she said. “You get to see different things your team can do before the game is on the line. You get to work different lineups and work different people here and there. You can try knew things before it costs you a district championship. We are so grateful to be able to do that this year.”

The coach said her team still needs to work on avoiding a one-track mind.

“We want to switch it up and change it up,” she said. “We need to be versatile. We need to have an ability to throw different things at teams. This is a fun team. I love them, and they are having a good time.”

Bates said the team still has their sights set on a district title.

“We want to go undefeated,” she said. “Going 10-0 last year put a taste in our mouth that we want again. They know how to go about getting that. When the rankings came out, I think this team got hungry because we were unranked for the first time in a long time. They saw all of these other teams on there and had something to prove. They are ready to prove themselves worthy to be ranked.”

PNG capped off the tournament with a 4-0 win over Little Cypress-Mauriceville.

Hannah Leblanc led PNG in assists with three, followed by Cutright and Miller, who each had two and Scroggs, Emma Zumo and Sonnier, who had one each.

The Indians held opponents to 10 shots on goal for the weekend, while amassing 81 shots on opposing goals.

PNG also possessed the ball 65 percent of the time for the tournament.

PNG’s next district game is against Crosby Jan. 26.

In his second practice as a Louisiana Tech Bulldog, former Memorial Titan Kenneth Lofton Jr. realized the game was a... read more