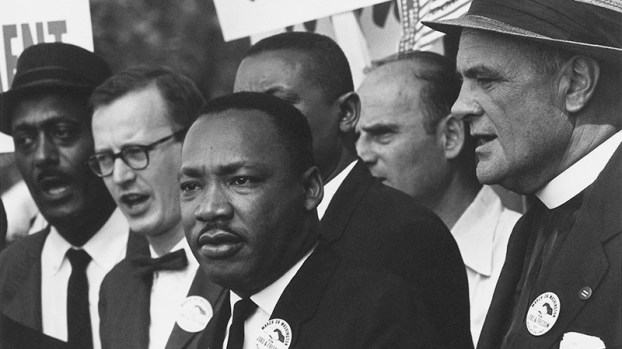 Martin Luther King Jr. during the 1963 March on Washington for Jobs and Freedom, during which he delivered his historic "I Have a Dream" speech, calling for an end to racism.

The words and vision of Dr. Martin Luther King Jr. are just as relevant today as they were decades ago, local leaders say.

“We, as a people, can unite as Americans against those that openly and secretly seeking to unravel, undo and promote an agenda of hate, division and insurrection that Dr. King gave his life fighting against,” said Michael Shane Sinegal, Jefferson County Pct. 3 commissioner, when asked what we can do to continue King’s vision. “We can begin by holding the person in the mirror accountable and then by holding others equally accountable.”

Mark Porterie, superintendent for the Port Arthur Independent School District, said as a people we have to be able to stop, listen and appreciate the differences of people and that Dr. King’s belief of nonviolence is something we desperately need now.

The city of Port Arthur has a unique tie to Dr. King; a support group founded by Hargie Faye Savoy at the request of Coretta Scott King.

The celebration of King’s message is also important to local citizens.

Sinegal said that is mainly due to the sacrifices made by individuals such as Dr. King, Coretta Scott King, Hargie Faye Savoy and family along with the many volunteers who not only keep “The Dream” alive, but individuals such as himself who are living the reality of the “Promise Land.”

Porterie, likewise, agreed with the importance.

He said it is also important to teach our children the divisiveness that our country is experiencing does not have to be.

“It is possible for our country to be united again,” Porterie said.

Kalan Gardner, president of the Port Arthur branch of the NAACP and pastor at First Sixth Street Baptist Church, said we, as a people, need to continue to shine light on racism and various racial issues and tensions going on today that are the same issues Dr. King spoke about.

We need to continue to find solutions to better society, he added.

Carolyn Thibodeaux, children’s librarian in Port Arthur, said Dr. King reminds us to stand up and speak out against the injustices all around us, in our local communities and in what we see in the world.

“People are understanding there is recompense for holding leaders accountable,” Thibodeaux said, adding it reminds us to serve beyond our own families and to serve in a way to increase our community effectiveness.

We may only be one person but we can make a difference, Thibodeaux said, adding we rebuild our neighborhoods.

She said regular conservations are needed to build a collective agreement that all can work together on and feel good about because faith will increase along with the community’s equity.

The National WWII Museum archives just got a little more complete courtesy of a Port Arthur veteran. For a little... read more