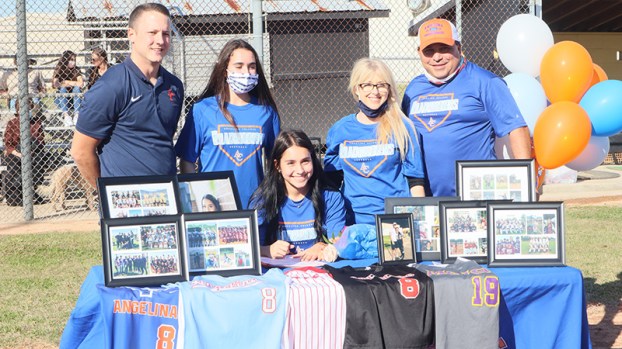 Surrounded by family, coaches, teammates and friends at the Nederland Softball Field, Alyssa Collazo and Danielle Richardson signed their letters of intent to play. Collazo, who plays third base and short stop for Nederland, will play softball at Angelina College in Lufkin, while Richardson, who plays third base and catcher, will play out of state at Lyon College in Batesville, Arkansas.

“It felt really good,” Collazo said about the signing. “I’ve been waiting for this since I was about 3 years old. Just to play college ball and finally sign, I’m just very excited to attend Angelina.”

Collazo said she knew she had a chance to play at the next level when she started to play select ball in eighth grade.

“I just got better and better,” she said. “Coaches started showing interest.” 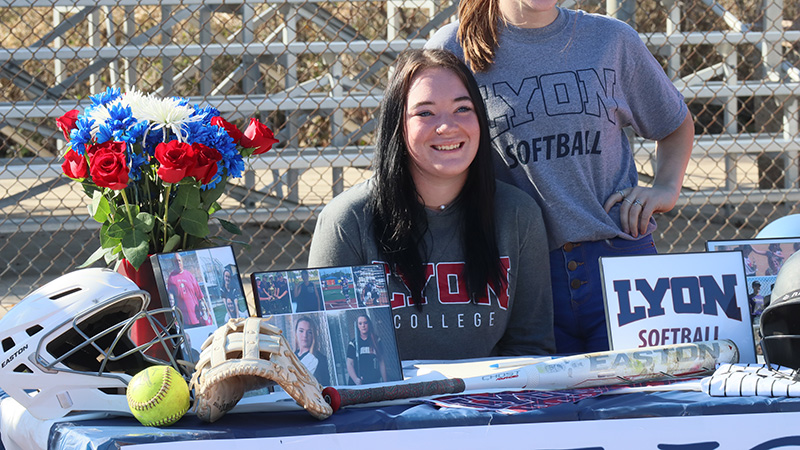 “I felt like I had a shot to play in college about my sophomore year in high school,” she said. “I was more competitive in select softball and was getting looked at by more colleges. It made me feel more confident.”

Both players cite games against rival Port Neches-Groves as their most memorable moments in their time playing for Nederland.

“I had the winning hit for the PNG game,” Richardson said. “It felt pretty good. It was 0-0 in the bottom of the seventh. My hit scored our runner on second for the win. It was great. I was one of the youngest on the team. It gave me more confidence.”

“Those games against PNG were the most hyped games I have ever played,” she said. “It made me fall more in love with the game. The fans were screaming when we made plays. That was just the moment.”

Both girls want to improve their games this year and have high expectations for the team.

“I’m looking forward to doing a lot better, personally,” Richardson said. “It would be nice to be district champs and go into the playoffs.”

Their head coach, Will Mallette, said he his proud of his players.

“They work so hard for so long,” he said. “You see them come in as freshmen and you think they have some talent. Then you see them work for it and get to play in college. I enjoy watching them take pride in it and knowing that they have earned it.”

Mallette hopes the event plants a seed in some of the younger players’ minds to work hard for their dreams.

“We have a lot of players that graduate and then they will be up here during the summer or Christmas break helping,” he said. “We have a great cycle of players helping players. They give back to the program. I don’t know if that happens everywhere, but it is a blessing. I’ve been here for nine years, and I don’t want to be anywhere else.”

In his second practice as a Louisiana Tech Bulldog, former Memorial Titan Kenneth Lofton Jr. realized the game was a... read more