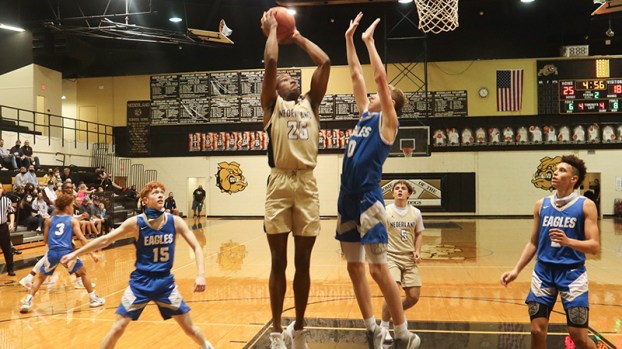 Nederland’s CJ Guidry, 25, goes up for a contested shot at the rim during the Bulldogs’ 63-53 over New Caney Dec. 30 at the Dog Dome. Chris Moore/The News

After dropping two consecutive games, the Nederland Bulldogs defeated the Galena Park 68-48 at Galena park High School Wednesday. Nederland head coach Brian English said he hopes his team keeps its energy high when taking on a Memorial Titans team that has won two in a row.

After starting the season 13-0, the Bulldogs fell to Beaumont United and Barbers Hill in back-to-back losses by a combined 41 points.

“I think that United game kind of lingered on us a bit,” English said of the loss to Barbers Hill. “We struggled. I think we came out flat. We missed shots. When you miss them early and then started forcing shots. We just didn’t play well.”

“It was one of those things where we didn’t play good basketball and you look up and you are down 15,” he said. “They were better than us the other night. A lot of that had to do with our energy.”

After the Bulldogs’ 65-33 loss to Beaumont United, English said his team struggled moving the ball against the Timberwolves press. The Titans also like to disrupt offenses by pressuring the ball up the court.

After starting the season 3-8, the Titans have won three out of their last four, including a 64-50 win over Port Neches-Groves Tuesday.

“They play with a lot of energy as well,” English said of Memorial. “They lost two big kids last year, but they make up for it as far as their hustle and grit. We are going to have to match that intensity.”

Throughout the season, English said he wants someone to step up and be the consistent third scorer behind Tyler Jackson and Joseph Gipson.

“He has given (that type of performance) a few times,” English said. “He really stepped up big for us (Wednesday). I’m hoping he can continue to do that. We need that third guy to give us points and make baskets.”

Memorial boys basketball coach Alden Lewis has yet to have his full roster suit up for a game. Three players... read more