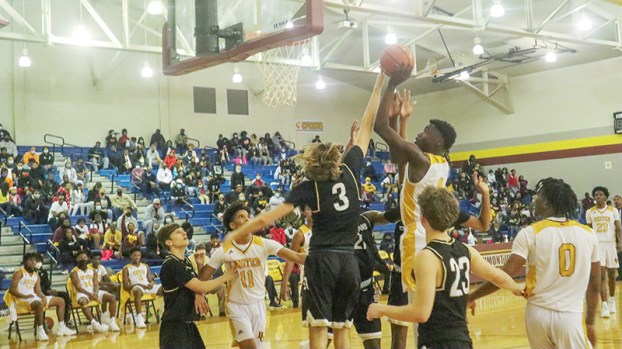 Beaumont United’s Traelyn Porchia scores off an offensive rebound in the third quarter of a 65-33 win over the Nederland Bulldogs Tuesday. Chris Moore/The News

BEAUMONT — The Nederland Bulldogs entered Tuesday’s matchup against Beaumont United with a goal of proving they belong in the discussion of the state’s top 5A basketball programs. After the dust settled, a 65-33 defeat at the hands of the Timberwolves showed that the Bulldogs still have work to do.

After the game, Nederland head coach Brian English praised the No. 2-ranked Timberwolves but also shouldered the blame for his team not being prepared.

“We just did a poor job with the press,” English said. “That starts at the top. That is my job. We have to do a better job. We are going to get back in the gym and work on it. We are better than that. We just didn’t do a good job (Tuesday).”

The Timberwolves smothered the Bulldogs for most of the game with a full and half-court press, making it difficult for Nederland to advance the ball without a turnover. The pressure led to several errant passes that went careening out of bounds or into the hands of BU players for easy layups and rim-rattling dunks that ignited the home crowd. 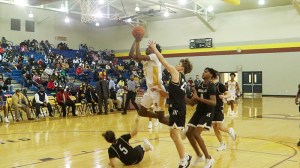 Beaumont United’s Terrance Arceneaux scores through a foul in the third quarter of a 65-33 win over the Nederland Bulldogs Tuesday. Chris Moore/The News

The game was close after the first quarter as the Bulldogs trailed 14-8. In the second quarter, the Timberwolves outscored the Bulldogs 14-5 and 25-8 in the third.

Coming into the game, Nederland’s leading scorer Tyler Jackson said the game was a chance to show the district and the rest of 5A that the Bulldog’s undefeated record was not just a product of an easy schedule. By halftime, Jackson was visibly upset and finished the game with a team-high 11 points. English said his team’s confidence was not as high after the game.

“That is a really good team,” he said. “They have a lot of talent and are well coached. They do a great job with them. We’re not 30 points worse than them, but (Tuesday), we were. That is what the scoreboard showed. We have to get back to work.”

English said he told his team they now have two options.

“I told the kids that the sun is going to come up tomorrow,” he said. “We have to get up and work. We have a game Friday night. I told them they can come in with their heads down and this thing can snowball, or we can get better from it. A lot of times, losing like that humbles you. Hopefully, we can take it the right way and be hungry and continue to move forward.”

English said he is happy to have another shot at BU on the schedule.

“I watched Texas beat Kansas by a whole bunch of points the other night,” he said.

The Bulldogs will see the Timberwolves again Jan. 29 at Nederland High School.

Nederland will tipoff against Barbers Hill at 7 p.m. Friday at the Dog Dome.