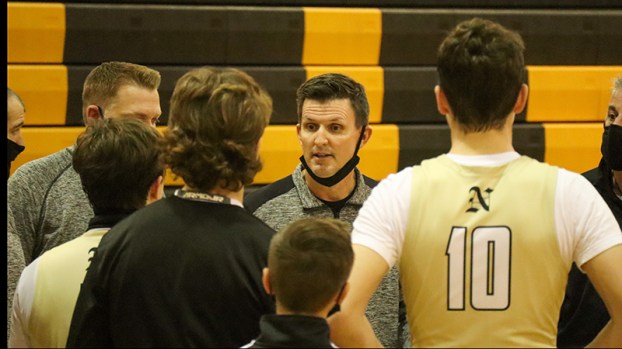 Nederland head coach Brian English talks to his team in a timeout during the Bulldogs’ 63-53 win over New Caney at Nederland High School. Chris Moore/The News

Battle of the unbeaten: Nederland, No. 2-ranked Beaumont United to square off

NEDERLAND — The Nederland boys basketball team knows what is at stake during Tuesday’s matchup against fellow undefeated Beaumont United.

Nederland senior post player Tyler Jackson said the game is an opportunity to prove the Bulldogs deserve to be treated as top dogs.

“We are the underdogs and we have to come out and show everyone that it hasn’t just been the teams we are playing,” he said. “We’re really good and deserve to be 13-0. We have a lot to prove and if we beat them, no more talking after that.”

The Bulldogs have only scored 60 points or more in five out of their 13 games. Their season high came in a 70-51 win over Willis on Dec. 18.

The Bulldogs defense has been the anchor, holding opponents to an average of 41 points per game. Nederland has held opposing offenses to fewer than 50 points in all but three games.

The majority of Nederland’s points come from Jackson and senior Joseph Gipson.

In the Bulldogs’ 63-53 win over New Caney on Wednesday, Jackson and Gipson combined for 36 points. Jackson closed out the game with 10 points in the fourth quarter.

Jackson will have a tough matchup against 6-foot-6 Terrance Arceneaux, who scored 29 points in the Timberwolves 72-58 win over Crosby on Dec. 23, which was United’s last game.

Arceneaux has received interest from Houston, LSU, Texas and Texas A&M to play on the next level.

United was scheduled to play against Port Neches-Groves last week until a PNG player tested positive for the coronavirus prior to the game. The two teams rescheduled that game for Jan. 9.

The Texas Association of Basketball Coaches ranks Beaumont United No. 2 and Nederland No. 18 in 5A hoops. A win, or even a competitive game, against the Timberwolves could go a long way to boosting the Bulldogs into the top 10.

The Bulldogs’ most impressive win on the season might be their overtime 48-46 victory over West Brook, which was ranked No. 16 in 6A at the time.

Jackson also had 25 points against Mid County Madness rival Port Neches-Groves in a 46-31 win for the Bulldogs.

NEDERLAND — In the fourth quarter of a contested game between Nederland and New Caney, the Bulldogs went to their... read more