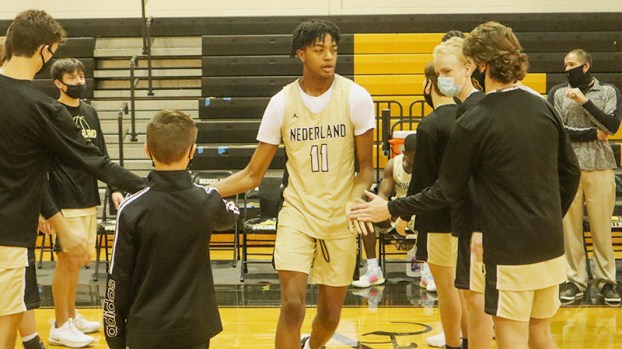 NEDERLAND — In the fourth quarter of a contested game between Nederland and New Caney, the Bulldogs went to their top player to ice the game. Senior big man Tyler Jackson closed out the contest with 10 points in the final quarter, on his way to scoring 23 points in the game, giving Nederland a 63-53 victory over the Eagles.

The performance helped keep the Bulldogs’ undefeated record alive and continued to solidify Jackson’s place at the top of the District 21-5A food chain.

“He’s our main offensive threat right now,” head coach Brian English said. “His motor is a lot different than it used to be.”

English said Jackson couldn’t play on the varsity team as a freshman because he lacked the intensity that often comes with age and experience.

“Now, he treats every play like it is crucial,” English said of Jackson. “He always had the skills. Of course, he has gotten better in every phase of the game, but his motor is what has really improved the most.”

In a 48-46 overtime win earlier this season against No. 16-ranked West Brook, Jackson poured in 26 points.

“This is my last season, so I have to make sure it is the best season I have ever played,” he said. “I have to make it count. I feel like if the ball hits my hands, I can make something happen. I don’t have to score. Like coach says, good things happen when we work the ball into the post and play inside out.” 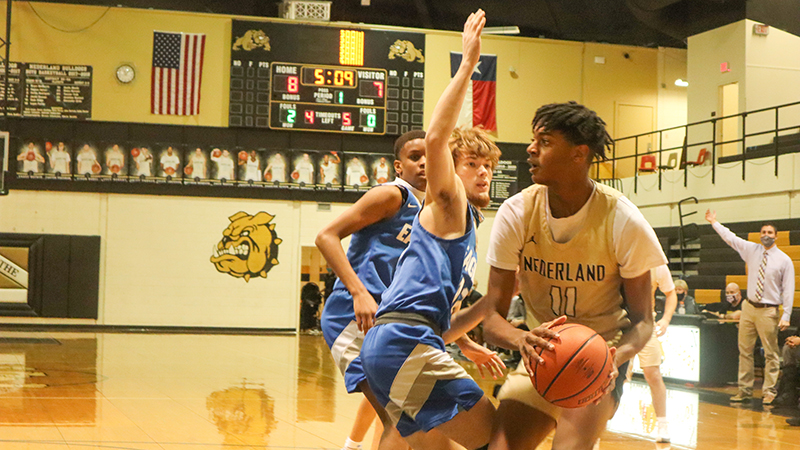 Jackson said he looks up to players like LeBron James.

At 6-foot-6, Jackson can send the crowd into a frenzy with an electric block at the rim or by flushing it with two hands. The Bulldogs star said if forced to chose between the two, he’d pick dunking because of the way crowds react and the energy it gives his teammates.

“Either way it goes, it gets everyone hype,” he said. “Both are really good feelings. I try to bring offense and provide defense for the team. I can score it, but my defense is going to be what helps us most against good teams.”

Jackson realizes opposing teams focus on him, which allows him to get other teammates involved.

“I try to be a leader on and off the court,” he said. “I try to set them up to get open shots. We have to stay focused.”

Jackson is dedicated to his craft.

Shortly after the final buzzer sounds, Jackson is in the gym working on his game.

The Bulldogs scorer is never far from the game. During rival Port Neches-Groves’ game against Kountze, Jackson strolled in to support his friends.

“There is a rivalry on the court, but they are my close friends,” he said. “(PNG head coach Chris Smith) was my freshman coach. I just wanted to support.”

Last season, Jackson had back-to-back career high games of 31 and 37 points against Sharpstown and Alvin, respectively in the Bulldog Classic.

“It felt good,” he said. “I won MVP at the Hardin-Jefferson tournament last year, too. It is disappointing that we don’t have any tournaments this year.”

The University Interscholastic League banned tournaments this year due to the coronavirus pandemic.

“I really like tournaments,” Jackson said. “They make us better. We get to play against teams we haven’t seen before. It would’ve helped us a lot this year.”

Jackson said he has high expectations for himself and the team.

“I plan on winning the MVP of the district and going far in the playoffs,” he said. “I just want to make memories with my teammates.”