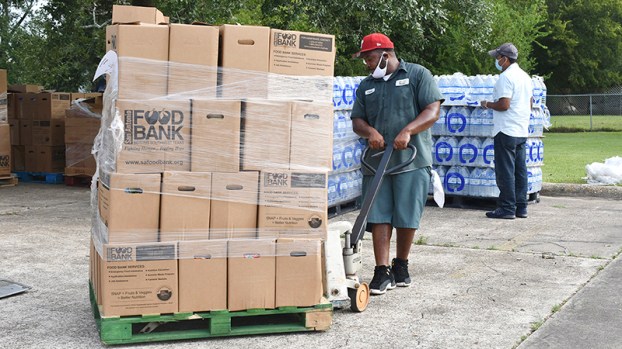 An employee with the South East Texas Food Bank unloads a pallet of food at a distribution event outside Empowerment Church in September. (Mary Meaux/The News)

During the season of year-end giving, philanthropist Mackenzie Scott has delivered a huge impact to Southeast Texas by choosing the Southeast Texas Food Bank as a recipient of one of her gifts during a distribution of more than $4.15 billion in philanthropic giving spread across 384 non-profit organizations across the nation.

The Food Bank’s share of Scott’s giving is an historic $9 million, the largest single gift made to the Food Bank in its 29-year history.

“We are humbled and honored by Ms. Scott’s selection of our organization as one of the recipients of her extraordinarily generous giving,” said Dan Maher, President/CEO of the Southeast Texas Food Bank.

Maher suggested that possible uses of the funds to be considered include support of long-term capital expansion plans to create more food storage and distribution capacity, immediate programming enhancements, and savings instruments to help supplement public and private donations.

“This gift will help transform and expand our operations, but it also highlights the extraordinary need for hunger relief that our community faces even in normal circumstances and the scale of services that we need to develop for the future,” Maher said.

In blog posts associated with discussion of her philanthropy, Scott identifies herself as a Mom, writer and advocate.

Her philanthropic giving is fueled by significant stock holdings in Amazon and her desire to give wealth back to “the society that helped generate it.”

Scott noted that the 384 organizations most recently supported by her philanthropy were chosen because she wished to emphasize giving support to organizations “with strong leadership teams and results, with special attention to those operating in communities facing high projected food insecurity, high measures of racial inequity, high local poverty rates, and low access to philanthropic capital.”

Scott’s philanthropic choices demonstrate a desire to support long-term domestic hunger relief efforts among other causes. Of the 384 organizations aided by her recent giving, 42 of the 200 Feeding America network food banks are among those supported.

“Clearly, Ms. Scott believes strongly in the mission of food banks and the Feeding America network,” said Maher. “Even in reasonably stable economic conditions, we have 1 in 5 Southeast Texans in need of hunger relief, so she recognizes that our community faces a consistently uphill climb in gaining access to sufficient food and infrastructure to achieve impactful results.

“I hope her recognition of our community’s challenges reminds our community of the responsibility we all have to continue building upon an opportunity like this to provide sufficient nourishment for those who consistently face hunger in Southeast Texas. Our neighbors in need depend on others to help them improve their circumstances, and a single gift, even one as large as Ms. Scott’s, is not enough to put an end to local hunger issues.”

Maher said that while ultimately decisions about how the gift will be used lie with the Food Bank’s Board of Directors, the intent of the gift is to enhance the Food Bank’s community impact.

“This gift is well-timed because the board adopted a refined short-term strategic plan through 2022 earlier this year,” he said. “Some of those strategic initiatives will benefit greatly from this gift.”

With the calendar flipping over to 2021, and COVID-19 still very much a factor in professional golf and its tournaments,... read more