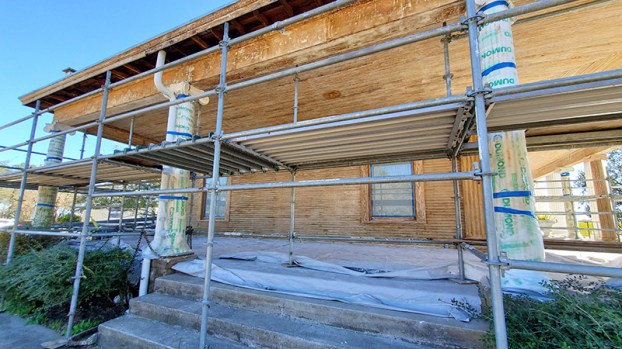 A side view of the paint stripped wood on Rose Hill Manor. (Mary Meaux/The News)

The outside lower level of Rose Hill Manor may look at bit bare right now, but that will change in the coming months.

The 144-year-old historical structure at 100 Woodworth Blvd., once home to the Woodworth family and later donated to the city, is getting a new paint job. The LaBiche Architectural Group Inc. is tasked with overseeing the project that must follow specific Texas Historical Commission guidelines. For instance, the city cannot just go out to a local home repair store and purchase a window. The window has to be as near as possible to the historical accuracy.

The same can be said with the color of paint. Adam Saunders, director of the Civic Center that also oversees other city properties, explained the paint has been stripped off the bottom half of the house and the same type of paint used originally must be applied.

The porch ceiling will also regain its former luster with a light blue color, he said. 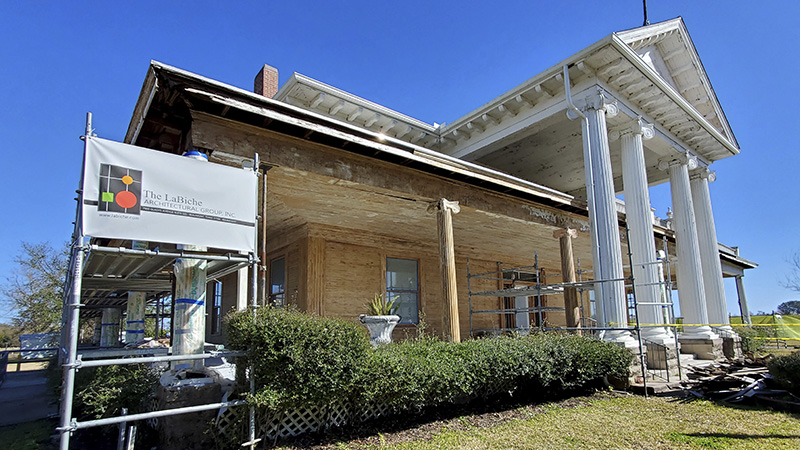 Saunders said besides the painting there will be repairs done to the columns that are in the worst condition.

Other work includes repairs to the eaves, he added.

The LaBiche Architectural Group is well known and offers services for restoration, renovation and rehabilitation of historical structures listed on the National Register of Historic Places, as well as those listed by the Texas Historical Commission, according to information from LaBiche’s website.

The Classical Revival-style home with 14 rooms including four bedrooms, four complete bathrooms and three fireplaces, conjures up the elegance of the early 1900s and is something the owners shared with the citizens of Port Arthur beginning in 1947.

The plaque in front of Rose Hill Manor, also known as the Woodworth House adjacent to the seawall, tells of how the home was built in 1906 at what was the edge of town. Rome Hatch Woodworth and wife Mary raised their children, George and Phebe there.

Mr. Woodworth was a real estate dealer, later a banker and the city’s third mayor while his wife served as director of the First National Bank and was active in the Department Club.

According to early day citizens of Port Arthur, Rome Woodworth left a sizable fortune in the trust of the city for perpetual care of the mansion and grounds. The city ran short of money and utilized the Rome Woodworth’s trust funds for city purposes with a promise that the city would maintain the property in perpetuity to fulfill the intended original purpose of the trust funds.

With the continued turnover in city government over decades, no one seems to recall Rome Woodworth’s sizable funds left for the property’s care, nor the city’s agreement to maintain the home in prime condition in exchange for the Woodworth fund takeover by the city.

The Department Club, which is part of the Texas Federated Women’s Club, has been responsible for some of the upkeep. The city doles out a portion of funds for repairs, but repairs must meet specific requirements as the home is a state antiquities landmark with a historical designation.

The 18th Street house where police say a Port Arthur homeowner shot and killed one of three intruders during an... read more