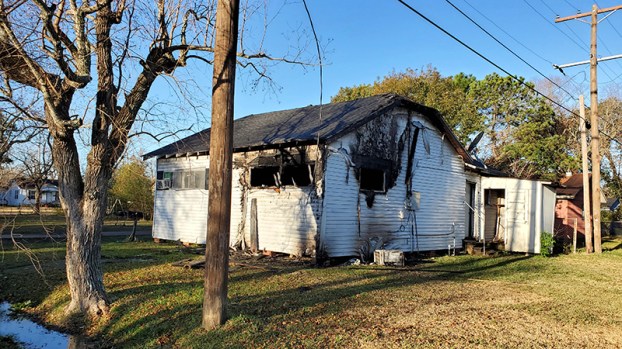 A side view of an 18th Street home that was shot up and followed by a suspicious fire. (Mary Meaux/The News)

The 18th Street house where police say a Port Arthur homeowner shot and killed one of three intruders during an aggravated robbery was the target of a shooting on Monday followed by a suspicious fire six hours later.

Assistant fire marshal Antonio Mitchell said the fire likely started in a bedroom, which was a total loss. The rest of the house in the 2500 block of 18th Street did not sustain any fire damage.

The cause of the fire, which officials deemed suspicious, is undetermined and remains under investigation, Mitchell said.

Hebert said detectives are interviewing witnesses from the initial aggravated robbery, adding evidence indicates the homeowner, who was in the house during the crime, was defending his children and knew one of the assailants — the killed by gunfire.

The deceased was identified Monday as Terence Ellies, 27, of Port Arthur.

Police are not releasing a description at this time of the other two males who entered the house during the aggravated robbery.

Hebert steered away from the phrase “home invasion” opting for the term “aggravated robbery” to describe the Sunday night altercation.

“We want the public to know we don’t feel this is just a random act where individuals are going and doing aggravated robberies,” Hebert said. “The evidence shows they knew each other.”

Whether the homeowner, described as a 29-year-old male, will ultimately face charges is not known at this time.

“I wouldn’t ever speculate on something like that,” Hebert said. “At this point in the investigation we feel (the shooting) was in self defense.”

That stance will likely stay the same as police gather information, which will be presented to the Jefferson County District Attorney’s Office for review.

Descriptions of the other suspects or any suspect vehicles are not being released. Neither can Hebert say if there is a person of interest in the case. 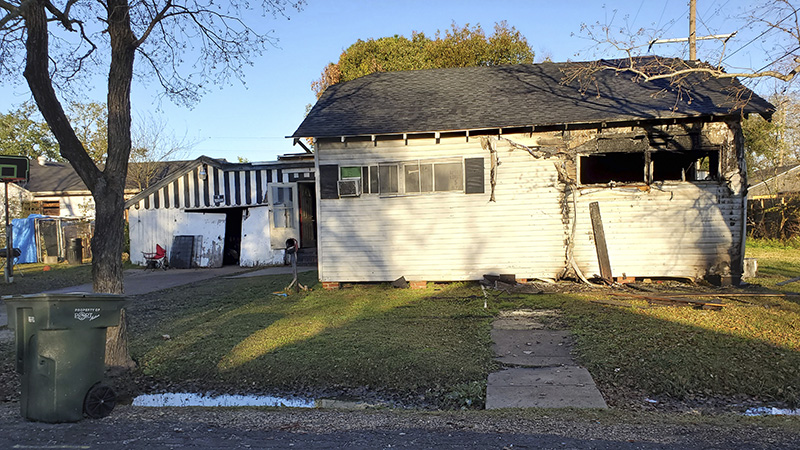 A home in the 2500 block of 18th Street was damaged by fire one day after the homeowner fatally shot one of three intruders. (Mary Meaux/The News)

Police Chief Tim Duriso said any time there is violence in the city it worries him, as well as police personnel. While Hebert insinuated the crime, or crimes, isn’t random there is no way to say whether the violence associated with the case will continue or not.

“It’s like foretelling the future, there’s no way to answer,” Hebert said. “This case is so active and fluid, witnesses are still being interviewed (Tuesday.)”

A man who lives on a nearby street said, “right now we have to be kinda concerned, something like this has never happened in this area.”

“Outside of that, it’s a good neighborhood to live in but you never know what will happen,” said the man, who did not want to give his name.

A second man who lives on an adjacent street who also did not want to give his name called out the police department and city leaders in response to the crimes.

“It is what it is,” he said. “Our law enforcement will not say what it all is. It’s all gang-related. (Criminals) get together and rob and steal. The detectives know what it is. They’re not willing to get out of their comfort zone.”

The man said many in city leadership roles look like him, African American, “and they are not willing to look at what happened … for fear of backlash when it’s time to vote.”

Police are not saying whether the crimes are gang-related.

Hebert said police realize there is a lot of apprehension from the neighbors and there should be, and now the goal is to get the other individuals involved.

If you know the suspects’ identity or have any other information on this or any other crime, call the Port Arthur Police Department at 409-983-8600 or Crime Stoppers of Southeast Texas at 409-833-TIPS. You won’t be asked your name and you may be eligible for a cash reward. You can also make an anonymous tip to Crime Stoppers by downloading the P3 Tips app on your smartphone.

It’s been well more than a year in the making, and now Walk-On’s Sports Bistreaux has a date set for... read more