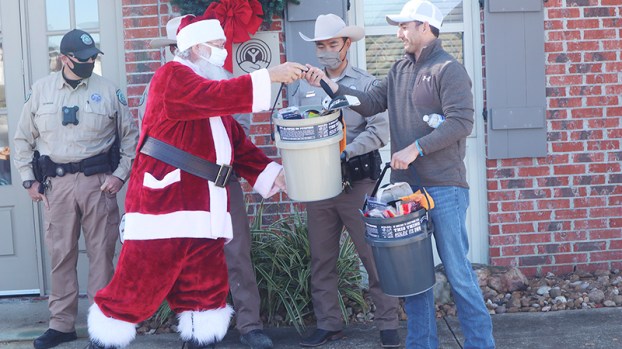 Santa presents gifts from United Way to Ruston Kennedy, right, Monday for his and his partner’s act of kindness to help save a stranded deer in the middle of Lake Sam Rayburn during a fishing tournament. Chris Moore/The News

A local fisherman received the Reel United Sportsman of the Year award Monday for helping to rescue a struggling doe in the middle of Lake Sam Rayburn during a fishing tournament earlier this month.

United Way of Mid and South Jefferson County hosted the Reel United tournament along with Valero Dec. 12. Both companies presented the sportsmanship award.

Ruston Kennedy and Chris Washburn were crossing the lake when one of them spotted the deer swimming and could tell it was exhausted.

“We saw the girl struggling pretty bad there,” Kennedy said. “She didn’t even move when we got her to the boat. She needed that. We got her to the bank and she couldn’t stand up for an hour. She eventually got up and ran away.”

Kennedy joked that he caught more deer than he did fish that day, but said he and his partner should’ve won the competition that measures the weight of the catch.

Three game wardens and Santa Claus were also on hand to congratulate Kennedy. Washburn was unable to attend.

The game wardens thanked the anglers for their kind act and Santa presented Kennedy with an Igloo cooler filled with goodies and one to take back to his friend.

“Texas has a huge, huge population of deer,” United Way spokesperson Janie Johnson said. “We are always looking for support to help take care of them. As a hunter, I thank [Kennedy] so much for taking care of them and taking that action. It’s that easy to take action and that is what United Way is all about.”

The United Way MSJC posted a short video on its Facebook page that Kennedy and Washburn took of the two pulling the deer to shore. As of Monday afternoon, the video had nearly 12,000 views.

Big plays by Nederland’s two-way star propelled the Bulldogs into the third round via a 34-21 victory over Pine Tree... read more