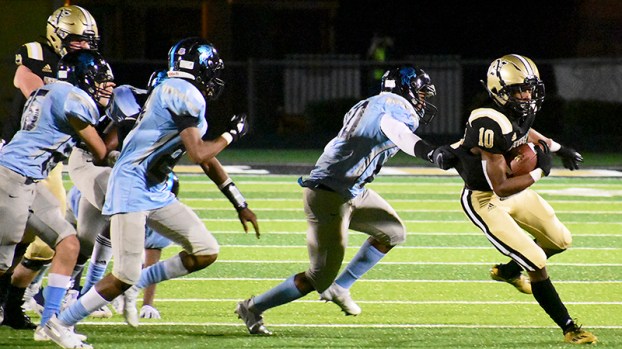 Next step, anybody? Long-awaited region semifinal at stake for Bulldogs, Pirates

The Pirates (9-1-1) will play the Bulldogs (8-2) in the 5A Division II Area Round in Nacogdoches today. Kickoff is set for 2 p.m. at Homer Bryce Stadium.

The matchup will be the first time Pine Tree, based in the Longview area, has played in the second round since 1976, when it lost 35-14 to Gainesville, who went on to lose to Beaumont Hebert in the 3A state championship.

“I think anytime you are in the second round, you want to win and keep going,” Pine Tree head coach Kerry Lane said. “A lot of people around here have talked about how it has been a long time since we have been in the second round, but as far as the school, it is different people. I came from a program, where we are used to playing deep and a lot of my coaches did too. Our kids are expected to do this, and we thought we had a chance last year. Not trying to sell it short, but a lot of our talk has been trying to beat Nederland.”

Nederland will have the task of trying to slow down the Pirates’ dynamic quarterback, D.J. Freeman, who completed 79 of 155 passes for 1,690 yards, 20 touchdowns and two interceptions for the season. He also was Pine Tree’s leading rusher with 111 carries for 866 yards and eight rushing TDs.

“He has been successful for us for three years,” Lane said. “He has been our quarterback for three years. I think a lot of people watch him and see that he uses his feet pretty well. He is a pretty athletic kid. He has always been pretty good at that. This year, he has been a lot better at managing the game. He has taken care of the ball and is making better decisions. He had a few games where he didn’t throw the ball as well, but he has stepped up the last couple of games.”

“Obviously, No. 10 (Mazyck) jumps out,” he said. “He and No. 8 (Fuselier) jump out the most. They are very talented kids. They look like a group of kids and coaches that have been together a while. You can kind of tell that they understand what they are being asked to do and they play really hard.”

Pine Tree’s only loss of the season was a 44-0 defeat at the hands of district champion Texas High School of Texarkana. The Bulldogs and Pirates have one common opponent in Jacksonville. In Week 2, the Bulldogs defeated Jacksonville 42-20. The game was a bit closer between the Pirates and Indians, but Pine Tree came out on top in a 49-42 decision.

The Pirates defeated A&M Consolidated in a 34-28 overtime thriller in the bi-district round Dec. 11. The Bulldogs trounced Houston Sterling 27-0 at Bulldog Stadium.

The Memorial Titans racked up 20 District 9-5A Division I honors, including district and defensive MVPs, 13 first-team and four... read more