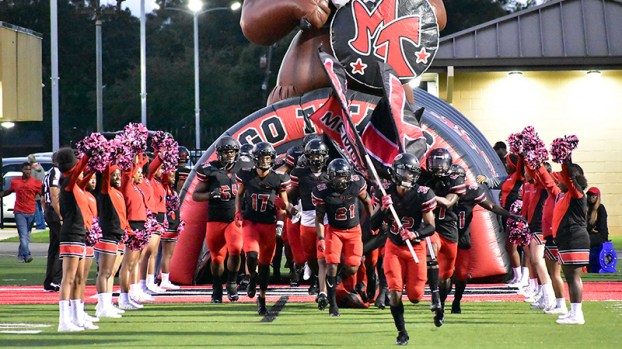 The Memorial Titans take the field against the New Caney Eagles in an Oct. 11, 2019, game. (I.C. Murrell/The News)

The Memorial Titans racked up 20 District 9-5A Division I honors, including district and defensive MVPs, 13 first-team and four second-team all-district selections. Head coach Brian Morgan and his staff also received coach/staff of the year accolades.

“It was always funny that when we would play teams, opposing coaches thought he was a good player, but you don’t realize how good he is until you have play against him,” Morgan said of Sanders. “He has some special abilities. What he does on film, sometimes he doesn’t look like he is moving fast because he is so smooth. He’s a high-level player who had an awesome year.”

Thomas was a menace for opposing offenses. He sacked the quarterback 11 times, had 19 tackles for loss, 49 total tackles, nine quarterback pressures, a blocked kick and two pass deflections.

“He played with a high motor all year,” Morgan said. “Realistically, that is an award that probably could’ve went to three different guys. It could’ve went to Christian, Jordon (Thomas) or (Jaylon) Guilbeau. I just thought the motor that Christian played with all year was great. He was very involved. That was pretty cool for Christian to win that because it gives him more motivation and confidence going into next year.”

Out of the 19 awards handed to Memorial players, 10 of them will return to the team next year. Each Titans player that was named to the all-district second team had a teammate at the same position on the first team.

“It was good to see them get rewarded for their work,” Morgan said. “They take a lot of pride in that and they were all anxious and excited about it. It shows their hard work paid off.”

NEDERLAND — For the Nederland Bulldogs, the record 1-0 is omnipresent. It is ironed in gold on top of their... read more