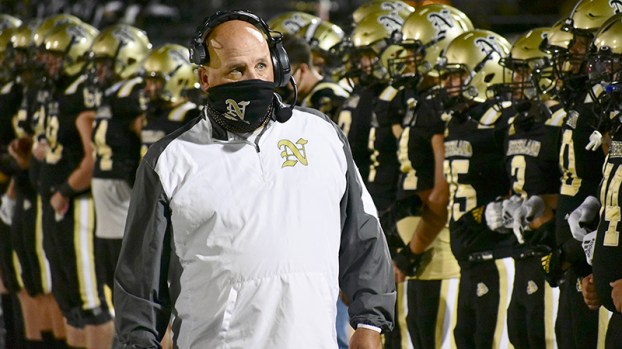 NEDERLAND — For the Nederland Bulldogs, the record 1-0 is omnipresent.

It is ironed in gold on top of their black undershirts the players wear for practice, weightlifting, watching game film and under their jerseys on game days.

The record is a slight reminder to win the day’s contest before moving on to the next task and has become the team motto.

Nederland head coach Monte Barrow said his coaching staff came up with the idea during the offseason, when players were still working out remotely.

“You usually have a preseason motto and a regular season motto,” he said. “That motto is about winning the day. We didn’t have the offseason that every school in Texas is used to having because of this pandemic. When we did start, we wanted everyone to just focus on the day and winning that day.”

The Bulldogs have used the phrase “winning the day all year.” After their loss to Mid-County Madness rival Port Neches-Groves, Barrow used the phrase when talking about how the team will rebound after losing the first district game of the season.

As Nederland prepared to take on Crosby for a share of the district title in the regular season finale, Barrow said his team would have to win each day of practice before playing the Cougars.

After Nederland’s 37-0 victory over Houston Sterling on Dec. 10, the motto matches the Bulldogs’ playoff record.

Barrow said the motto comes into play more in a single-elimination playoff.

“You start looking ahead and all of the sudden, what you should’ve been looking at comes up and bites you in the rear end,” he said.

Throughout the season Barrow and the coaching staff have told players that it takes six days to beat an opponent.

While the team mottos tend to change from offseason to regular season, Barrow said the “1-0” motto has stuck.

If the Bulldogs are able to win Saturday, they will reach the third round of the playoffs for the first time since 2012, when they defeated Pearland Dawson 22-19.

Pine Tree has never made it to the third round in the school’s 82-year history and hasn’t made it to the second round since 1976. Since the school began in 1932, the football team has only made the playoffs nine times. While they might not have much playoff history, the Pirates had their best season since 1976, when the team went 9-1 in the regular season.

“The first thing that stands out is their quarterback is highly talented,” Nederland defensive coordinator Chris Theriot said. “He is very athletic. In today’s offenses, it seems like that is what you see a lot of. He is probably one of their better athletes. They rely a lot on him. He is going to be a big challenge for us. They compare, schematically, to a few teams we have faced this year, so it is an easy transition for us to tell the kids what we want to do.”

Texan Live, a high school sports live streaming company, let go one of its announcers Monday after he referenced a... read more