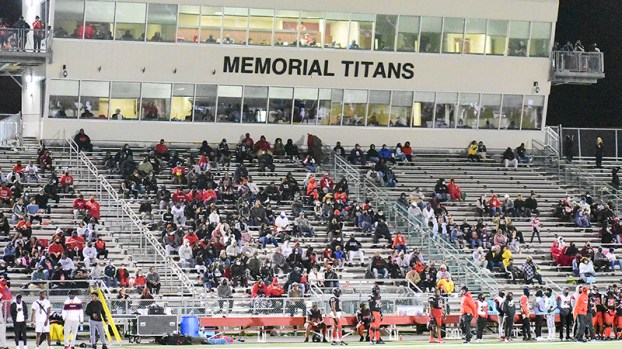 Memorial Stadium is pictured from the Dec. 11 5A Division I bi-district game against Fort Bend Hightower. (I.C. Murrell/The News) 12-11-20

Texan Live, a high school sports live streaming company, let go one of its announcers Monday after he referenced a noose during the broadcast of Fort Bend Hightower’s 41-34 win over Memorial on Friday.

During the fourth quarter of the broadcast, announcer Jon Meek was talking about the need for the Titans defense to get a stop on third down.

“As the game rolls on, that noose will be tightening up around the Titans’ neck,” he can be heard saying over the broadcast.

“You should never make that comment, no matter what game it is,” Brocker said.

“He won’t call anymore games for me. That’s not tolerated. There was a whole bunch of different verbiage he could have used. To say what he said was totally unacceptable. I don’t know why he said that. I don’t know the guy. I never went to dinner with him.”

The comments do not reflect the values of Texan Live, Brocker reiterated.

Meek said he was trying to illustrate the critical situation in the game.

“I remember saying it,” he said. “I haven’t heard the clip. I had a slight thought it might not be appropriate because of the times we live in. I’m sorry. I apologize for even saying that.”

Meek said there was no additional meaning to the phrase.

“Just trying to explain to the people it was a critical moment in which the offense needed to score,” he said. “They have to do it now or they won’t get it done.”

Meek, who is from Newton, said he was rooting for the Titans to advance.

“I hate Memorial lost, man. I wanted to see them win.”

“We don’t have a comment,” he said. “With things like that, we just move forward. We don’t let stuff like that touch us. I don’t internalize all of that junk.”

“(Texan Live) reached out and apologized to the district and said it wasn’t something they condoned,” he said. “They took care of it. They know the comment wasn’t appropriate at all … It seemed like it wasn’t the place. The comment that he was referring to — there were tons of other phrases he could’ve used to say the same thing. It just wasn’t a really smart deal.”

In an apology from Brocker to Memorial and PAISD, the Texan Live owner wrote “… I first and foremost would like to offer my sincerest apologies to everyone, your school district and team as this type of verbal behavior is completely unacceptable. My company does not condone the actions of this broadcaster and have since terminated. We have streamed over 900 games a year without a single issue. We handled the matter immediately as we were notified today. Texanlive has been covering PA Memorial since 2016 during regular season and playoffs sports.”

Why is the Bulldogs defense playing its best? It starts with experience & includes plenty of trust.

NEDERLAND — In the last four weeks, the Nederland Bulldog defense has recovered and returned a fumble for a walk-off... read more