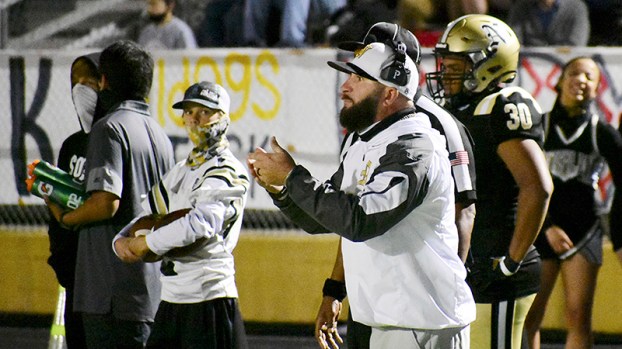 Why is the Bulldogs defense playing its best? It starts with experience & includes plenty of trust.

NEDERLAND — In the last four weeks, the Nederland Bulldog defense has recovered and returned a fumble for a walk-off touchdown against Barbers Hill in overtime, held Kingwood Park to nine points, recovered a late fumble to seal a share of the district title in a win over Crosby and shutout Houston Sterling in the bi-district round of the 5A Division II playoffs.

“When you end up making a few plays, you start expecting to make those plays,” head coach Monte Barrow said. “That is huge for a defense. There is belief on that side of the football. There is belief that it is going to happen and belief in one another.”

“These kids have played a lot of football together for a very long time, since peewee,” Theriot said. “They understand the game. They coach the kids to be good football players. We tell them not to be robots and to anticipate things before they happen.”

Theriot said the team’s collective experience contributes to the success, with several seniors starting on the defensive side of the ball.

“They understand the game,” he said. “A lot of them have played on varsity for three years. All of those are key factors.”

Barrow said the defense is on a hot streak. Four weeks ago against Barbers Hill, linebacker Kerrington Broussard came up huge on the first play of overtime, returning a fumble 72 yards for a walk-off touchdown.

Two weeks later, the Bulldogs recovered a fumble inside their own 20 to seal a 29-24 win over Crosby. The victory gave Nederland a share of the District 12-5A Division II title and the No. 1 seed in the playoffs.

The unit’s ability to trust one another and what they see on the field allows them to play fast,” Theriot said.

“I think trust has been huge,” he said. “Last year, we gave up big plays. It was probably because one guy was not getting the call or executing his job. This year, guys have trusted each other. That starts with communication on every play. The fact that they know every person is going to do their job is crucial.”

Barrow said Theriot and the coaching staff have helped the players come a long way.

“They know what they are doing,” Barrow said. “They put the work in to get those guys in the best position. They will tell you that they can put them in the right spot, but the players have to make the plays. With how athletic this group is, we try to not make them think too much and just play. We are better when we are simple.”

Constructed in 1929 and opened in 1930, Stephen F. Austin School has seen generations of students walk its hallowed halls.... read more