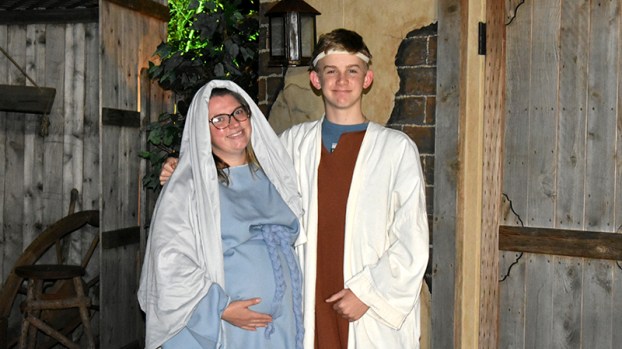 Megan Mistric as Mary, left, and Gavin Dupre as Joseph, pose for a photo before rehearsal for the Journey to Bethlehem presented by Wesley United Methodist Church in Nederland. Performances are on the hour and half hour from 6 to 9 p.m. Friday through Sunday. (Mary Meaux/The News)

NEDERLAND — For more than 30 years Wesley United Methodist Church in Nederland has presented the free, outdoors live-action Journey to Bethlehem for audience members.

The tradition continues this year with a few changes due to COVID-19, but the story and message of Jesus’ birth remains the same.

Journey to Bethlehem will be presented from 6 to 9 p.m., every hour and half hour on Friday, Saturday and Sunday outside the church, 3515 Helena Ave. in Nederland.

Courtney Austin, production leader, said the performance typically lasts 45 minutes from start of one show to start of the next show, but due to COVID restrictions they are chopping the time to 18-minute shows. This gives the crew a chance to wipe down all over the set and benches that are spaced out in 6-feet increments.

Austin said they are also limiting the number of audience members for each show to 175 — normally the audience would be as many people who could fit in the area, up to 400.

Besides the shortened production and added performances, they are also canceling the children’s area entry. Instead they will provide the children audience members with a bag of crafts to bring home along with the traditional gift of a toy flute, Austin said.

The usual animals such as the camel will be on set but the petting zoo portion is canceled this year. 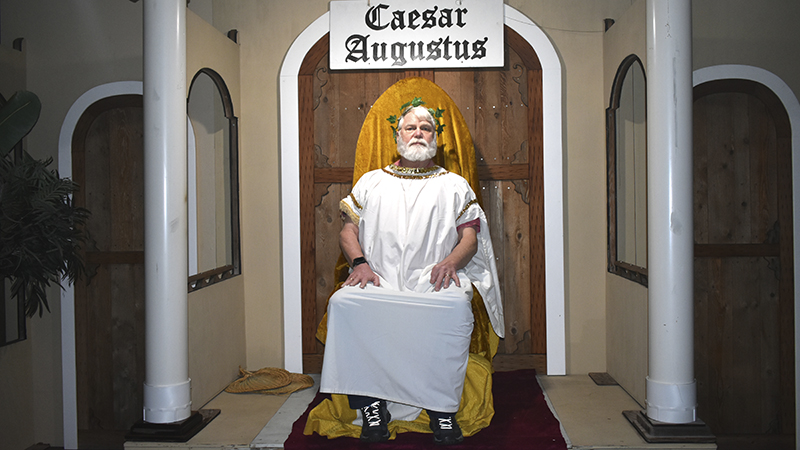 Todd Wind sits on the throne as Caesar before rehearsal for the Journey to Bethlehem presented by Wesley United Methodist Church in Nederland. (Mary Meaux/The News)

The story and what it means

Like other members of the congregation, Austin feels the connection to the nativity story.

“For me, even being in it, it’s almost like you are there,” Austin said. “The shepherds kneeling down to worship a live baby (they use a real infant for the part of Jesus). It’s like you’re engulfed in what really happened.”

Though it’s a shortened show, the action is still there, from the Angel and Mary to Herod and beyond.

“Every little step of what happened all the way to Jesus being born to the angel, saying this is the Christ child, come worship,” she said.

The amount of cast members in the show is reduced as some decided to give their services in other ways, such as making items from home. But this won’t take away from the action or the meaning.

Gavin Dupre, 14, is part of the church’s youth ministry and donned a costume to pose as Joseph for a photo. He’s been part of the church for quite some time and was even in the role of baby Jesus as an infant, he said.

Todd Wind, Austin’s father, is usually behind the scenes during the shows but this year takes on the role of Caesar.

A visibly pregnant Megan Mistric has portrayed several parts through the years, including Mary, the angel Gabriel and a townsperson. This year she’s once again taking the role of Mary.

Her reason to be part of the show?

To spread the love of the gospel of Jesus.

“I want more people to feel what I feel,” Mistric said.

NEDERLAND – After a bit of a slow start, Nederland’s offense kicked into high gear behind the running of senior... read more