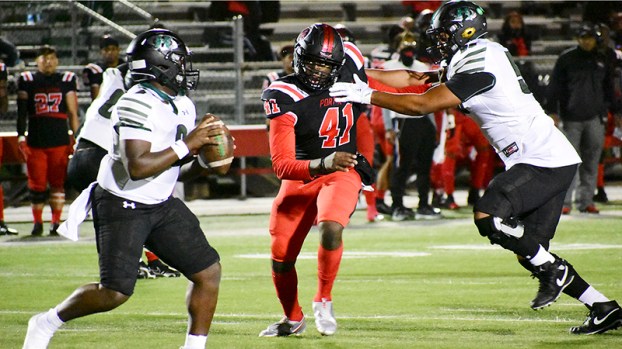 The Memorial defense that had dominated the district all year could not get the final stop needed to send the bi-district playoff game to overtime as Fort Bend Hightower scored on a 51-yard pass in the final seconds to beat the Titans 41-34 at Memorial Stadium Friday.

The Memorial defense allowed 371 yards of offense, including 272 rushing yards to the Hurricanes.

Memorial, the District 9-5A Division I outright champion, finished the season 9-1.

Memorial’s first drive ended when quarterback Jah’mar Sanders threw an interception on the third play that gave the Hurricanes the ball on the Titans’ 45. 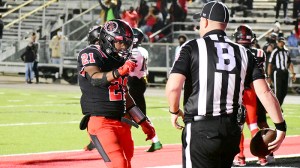 Memorial running back Branden Chaney offers a fist bump to the back judge after scoring a touchdown against Hightower in the second quarter Friday in Port Arthur. (I.C. Murrell/The News) 12-11-20

In the second quarter, the Titans offense began to show signs of life with an eight-play drive that ended with a 7-yard Branden Chaney touchdown run. The Titans missed the extra point.

Hightower put another touchdown on the board to go up 14-6 going into halftime. The Hurricanes extended their lead after connecting on a 55-yard run to make it 20-6.

The Titans answered with a 39-yard touchdown pass from Sanders to Illijah Williams on fourth-and-10, but Hightower gashed the Memorial defense with a 67-yard run on their first snap of the series to give Hightower a 27-14 lead.

“I’d have to go back and look at the tape,” Memorial head coach Brian Morgan said of his team’s run defense. “When you give up long runs, someone is not sitting right or out of their gap for whatever reason. That gets beat against good teams.”

A pair of big plays put the Titans inside the Hurricanes’ 5. Sanders ran it in from two yards out to pull within a score, but Hightower pushed back with a 1-yard TD run to bring the score  to 34-20 with 7:59 left in the game.

The Memorial offense completed a 10-play drive to pull back within a score. The highlight of the drive came on fourth and 7 from the Hurricanes’ 22. Sanders dropped back and made multiple defenders miss before weaving his way to a 17-yard gain. He scored two plays later on a 1-yard run.

The Titans defense helped out by forcing a three-and-out to give the offense a chance to tie the game with 2:50 remaining. The offense answered with a 34-yard touchdown run by Adrian Hayward, and Sanders’ diving two-point conversion attempt knotted the score at 34-34 with 1:18 left. 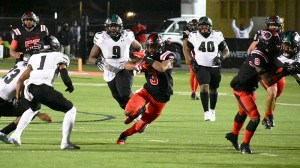 Hightower receiver Kaleb Johnson beat senior corner Jaylon Guilbeaux with a double move on a 51-yard touchdown catch with 10 seconds remaining to give the Hurricanes the go-ahead lead.

The Titans were undefeated entering the playoffs for the first time in school history. Earlier in the week, Morgan said the season would be wasted if the team lost in the first round.

“I can’t think about those first games right now,” he said. “That was a tough way to lose it. I thought when we were able to tie it when Jah’mar went for two on that unbelievable play, of we could get to overtime, we had the momentum. I thought it was our game to win in overtime.”

Hightower running back Charles Shelling, who finished the game with 239 yards on 20 carries and three touchdowns.

Sanders finished with 353 total yards and three touchdowns. Williams led the Titans with four receptions for 72 yards and a touchdown.

“He plays his butt off every week,” Morgan said of Sanders. “He’s the reason we were in that game. It was sheer will. He plays hard and he ain’t a big dude. He takes some punishment out there… He is a great kid and I love him to death.”

Hightower will play the winner of Seguin and Hendrickson next week.

MISSOURI CITY — While the Port Neches-Groves Indians dominated the time of possession, they ultimately ran out of time as... read more