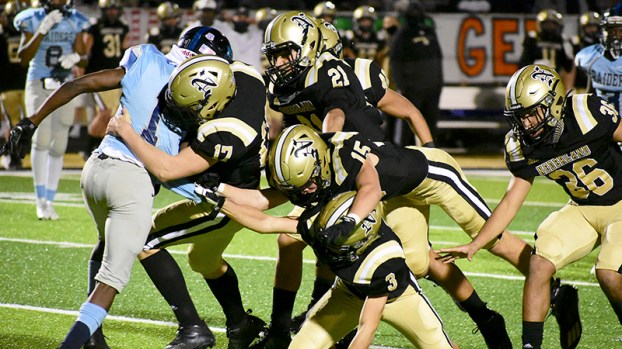 NEDERLAND – After a bit of a slow start, Nederland’s offense kicked into high gear behind the running of senior Josh Mazyck to power the Bulldogs to a 37-0 win over Houston Sterling in the Class 5A Division II bi-district round of the playoffs Thursday night at Bulldog Stadium.

Mazyck finished with a game-high 117 yards rushing on 16 carries. He scored on touchdown runs of 19 and 22 yards. Beau Seymour added 64 yards on six carries and two touchdowns. 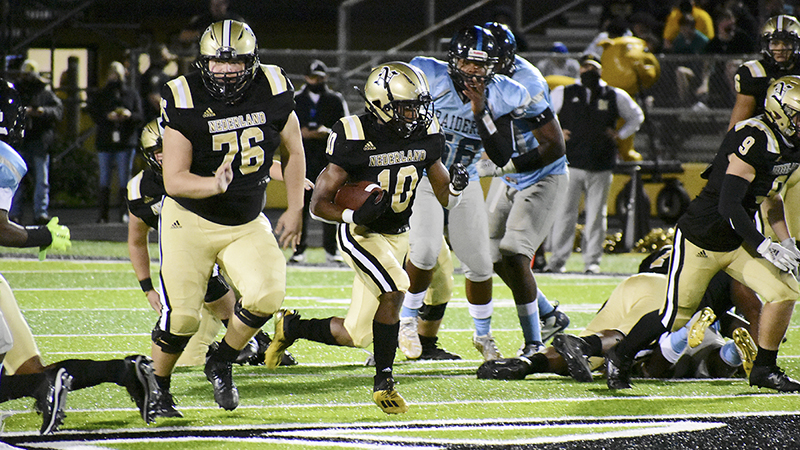 Rene Cunningham completed 11 of 18 passes for 160 yards and one touchdown. Kyndon Fuselier was his primary target, hauling in six catches for 132 yards, including a 20-yard touchdown.

As good as the Nederland offense was in racking up 419 yards, including 259 on the ground, it was the Bulldogs’ suffocating defense that kept the Raiders off the scoreboard. They limited Sterling to just 101 yards of total offense.

Leading 17-0 to start the third quarter, Nederland picked up where it left off in the second quarter. After being stopped on their first drive of the quarter, the Bulldogs quickly flexed their muscles by scoring on three straight possessions. Four consecutive running plays was all it took. Seymour had a 37-yard scamper and scored on a 4-yard run to extend Nederland’s lead to 24-0.

After forcing another three-and-out by the Raiders, it did not take the Bulldogs long to score. Mazyck started the drive with a 12-yard run. Cunningham hit Fuselier for 53 yards that would have went for a touchdown if not for a blind side block penalty. Cunningham found Fuselier on the next play for a 20-yard scoring strike to make the score 31-0. 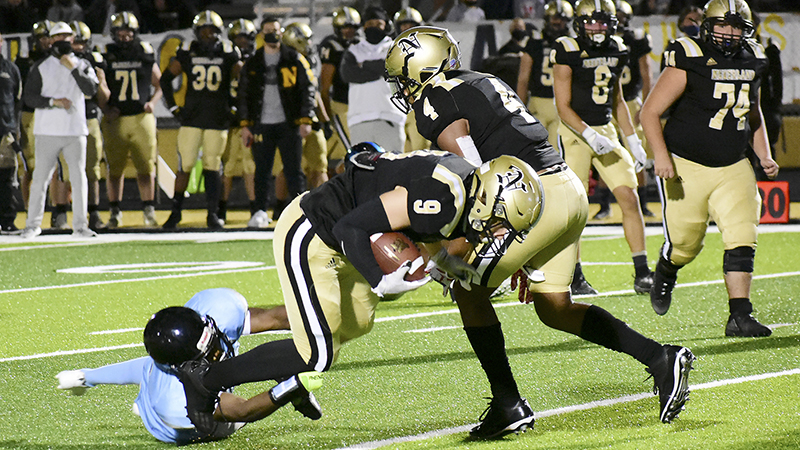 The Bulldogs closed the scoring on a Seymour 5-yard TD run, his second of the game. The extra point by Ethan Vincent was no good to make the score 37-0.

After a scoreless first quarter, Nederland’s offense found its stride to start the second quarter. On the first play of the quarter, Mazyck scored on a 19-yard touchdown run to make the score 7-0.

The Bulldogs defense forced a three-and-out on Sterling’s ensuing possession. Taking over at the Raiders 48, Nederland put together a second consecutive scoring drive.

Mazyck opened the drive with an 11-yard run. Facing fourth-and-8, Cunningham hit Kyndon Fuselier for an 11-yard completion to keep the drive alive. Mazyck scored on the next play, rushing over the right side for a 22-yard TD to make the score 14-0 with 7:21 left in the second quarter.

Nederland’s Evan Whitehead intercepted Anthony Brown on Sterling’s next possession, giving the Bulldogs the ball at their own 13. Following a 10-yard run by Mazyck, Cunningham connected with Fuselier for 33 yards to the Sterling 37.

On third-and-13, Cunningham hit Lance Nicolasora for18 yards to the Raiders 22. Mazyck’s 7-yard run gave the Bulldogs first-and-goal at the 10. The drive stalled and Nederland had to settle for a 25-yard field goal by Payne Barrow with :11 left in the quarter. The teams went into the locker room with Nederland leading 17-0.

Mazyck scored on the first play of the second quarter from 19 yards out to give the Bulldogs a 7-0 lead. Nederland’s defense forced a stop, which led to a 22-yard TD run to push the lead to 14-0 and the Bulldogs were on their way to a win.

After Nederland pulled its starters, Ethan Fobbs came in the game to rush for 49 yards on six carries. Sterling’s Anthony Brown completed 8 of 21 passes for 26 yards and rushed 10 times for 11 yards. Vernon Mosely had 27 yards rushing on four carries.

Nederland plays Pine Tree, a 34-28 overtime winner over A&M Consolidated, next week in the area round of the 5A Division II playoffs.

Christmas with Dr. Levy this Saturday set to benefit hundreds of children

“Christmas with Dr. Levy” will be a bit different this year due to the pandemic, but the reason behind the... read more