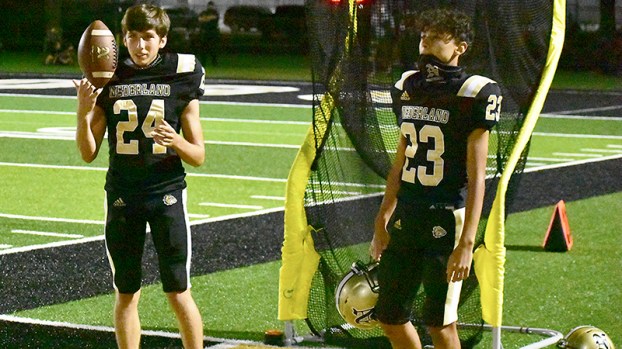 NEDERLAND — Place kicker Payne Barrow has sent footballs through the uprights for Nederland for four seasons on varsity.

While finding a four-year varsity starter at any position on a high school football team is difficult, finding a kicker might be more difficult, his head coach Monte Barrow said.

“You don’t see that at any position, especially a kicker, where you may have not developed your body to be strong enough,” Barrow said.

The fact the head coach and kicker share the same last name is not a coincidence. Payne Barrow is Monte Barrow’s nephew.

“He’s prideful in what he does,” Monte Barrow said of his nephew. “He doesn’t say much. Just being a kicker versus doing something else and kicking, it is just different. He’s also different in how the team looks at him. He’s been here for four years, all on varsity. Our team has confidence in him and has respect for him. He puts his work in. You don’t practice kicking in the same way you practice tackling or throwing as a set part of your practice. There is a lot of stuff he does on his own and that is a tribute to him.”

While the two are related, Monte Barrow said his nephew is not as intense, which helps with the isolated position and job of a kicker.

“You have to have the physical attributes to kick, obviously,” he said. “The mental part of being a kicker is just as important. With the pressures these guys can put on themselves, I think Payne is made for that as far as his mindset and how he approaches things. Some, if they didn’t know him, might take it as nonchalant, but that is just how he is made. I think it is good for what he does. He does not dwell on a miss and he does not assume he is going to make the next one because he made the previous one. That is good for our football team.”

Payne Barrow’s longest in-game field goal was a 44-yarder that he hit going into halftime to give the Bulldogs the lead over Beaumont United his sophomore year.

He said his longest practice field goal is 52 yards.

“For me, practice is just going through daily routines,” he said. “I kick field goals every day and practice kickoffs every day. I probably kick between 50 and 75 field goals a day.”

When Payne Barrow is not playing football, he is the midfielder for the Nederland soccer team.

“I like soccer better,” he said. “I get to be more involved as opposed to picked out plays.”

Payne Barrow is the only varsity starter that can say he beat rival Port Neches-Groves, which happened his freshman year. He said that is his favorite football memory.

He said this team has more talent than any other Bulldogs squad over the past four years.

“We can go all the way if we play our best,” he said. “We can go as far as we allow ourselves to go.”

PORT NECHES — Often, when analysts talk about offensive and defensive line play in football, they use the phrase hand-to-hand... read more