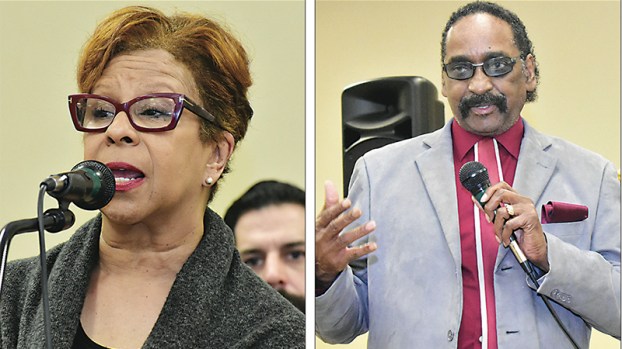 Voters in Port Arthur’s District 1 are 10 days away from electing their next representative in one of two city council runoffs from the Nov. 3 general election.

It will either be Ingrid West Holmes, a first-time candidate for public office and former director of Beaumont’s public health department; or Willie “Bae” Lewis Jr., a former Port Arthur councilman. The two are running to succeed Raymond Scott Jr., who reached term limits at that position but is running against the Rev. Donald Ray Frank Sr. for at-large Position 8.

Early voting is ongoing, with Election Day set for Dec. 19.

The candidates took time to respond to a questionnaire from Port Arthur Newsmedia about their stances and plans if elected (all responses have been edited for clarity):

Holmes: “I’m a third-generation Port Arthuran, raised and educated in the area. I have a strong background in local government. I have served as the liaison between the city council and city manager and the public health director of the city of Beaumont. Port Arthur is a great city with much potential to continue to grow. The natural resources in this community can be used to create many attractions. I have integrity. I am consistent and transparent. I am dedicated to this community and work cooperatively with other city councilmembers to achieve our goals. I will be accessible and approachable.

Lewis: “My 30-plus years experience in city government will continue to serve you well.”Lewis also listed some of his civic accomplishments, including experience as one of the plaintiffs in a voting rights lawsuit against the city (three federal judges ruled in 1981 against Port Arthur’s plans to implement voting changes, explaining the plans revealed a discriminatory purpose); helping the city change to single-member district voting; helping all departments reflect the ethnic makeup of the community and establishing term limits.

Is there anything you need to share with voters you did not share during the general election?

Holmes: “I want to ensure that the voters understand that Port Arthur is dear to my heart. With 31 years of diverse governmental leadership experience, the most important aspect of my candidacy is, Port Arthur is my home as it is yours, and I believe in the people of this community. A good councilmember should have integrity, a willingness to understand and learn new things, be cooperative with, others, and accessible and accountable. Through this candidacy, I have proven that I possess those skills.”

Lewis: “My supporters must return to the polls with friends and families to keep experience on city council. Inexperienced on council has cost taxpayers initially $24 million in streets and maintenance equipment (replacement today cost $40- to $50 million), plus it lowered the city’s bond rating (downgraded the city’s credit).”

If you’ve been on council before, how will that experience help you? If you’re seeking a council position for the first time, what advantages do you feel you have from that?

Holmes: “I know governmental leadership. I have been boots on the ground for the things that impact this community. I have worked to create and administer effective evacuation plans, [and] I have spoken as an advocate at the state level. I have created policies to ensure clean communities both as an employee and a volunteer in the city of Beaumont. I have 31 years of governmental leadership experience.”

Regardless of whether you were first or second in the general election, how do you feel about having to go through a runoff? Do you think a plurality election (in which the winner only needs more votes than any other contestant) is needed rather than majority (in which the winner needs at least 50 percent-plus 1 of the vote)? Are you concerned about election costs?

Holmes: “A runoff election is what is expected in a majority election if there are multiple candidates. The concern that I raise is in the plurality voting: Has the community really spoken because only the top vote wins? If that’s 35 percent, 34 percent, 30 percent, 1 percent, is that a true reflection of all the voters?”

Lewis: “All city council elections should be on plurality. The majority vote was implemented to suppress minorities’ participation. Runoffs create a second race. It gives the majority a second chance to pull together to oppress minorities, regardless of their qualifications.

“Plurality voting is better. Three reasons: It gives minorities a reasonable opportunity to get elected; you cut the runoff cost (90,000 to 100,000-plus); and voters can evaluate councilmembers every two years as opposed to every three years. The Charter Change Commission unanimously voted to change to plurality elections. The city council removed it from the ballot. The voters were denied the opportunity to vote on this change!”

NEDERLAND — “Welkom to Nederland.” The message, with “welkom” spelled in tribute to the city’s founding by settlers from the... read more