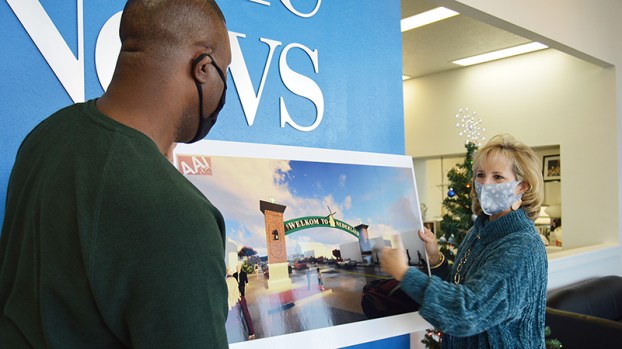 The message, with “welkom” spelled in tribute to the city’s founding by settlers from the Netherlands, will soon span Boston Avenue near 20 feet high at its center across the Gateway Arch to Nederland.

The Nederland City Council gave preliminary approval to the project, which is spearheaded by the Nederland Economic Development Corporation.

The structure’s concrete bases will anchor 8 feet below ground and include brick, medal and concrete aspects to withstand winds of up to 150 mph (category 4 hurricane speeds).

It will locate near Boston Avenue’s intersection with Twin City Highway just west of Cropo’s Barber Shop and cross the street to between Lee Michael Hair Parlor and Cuttin Corners Vinyl. 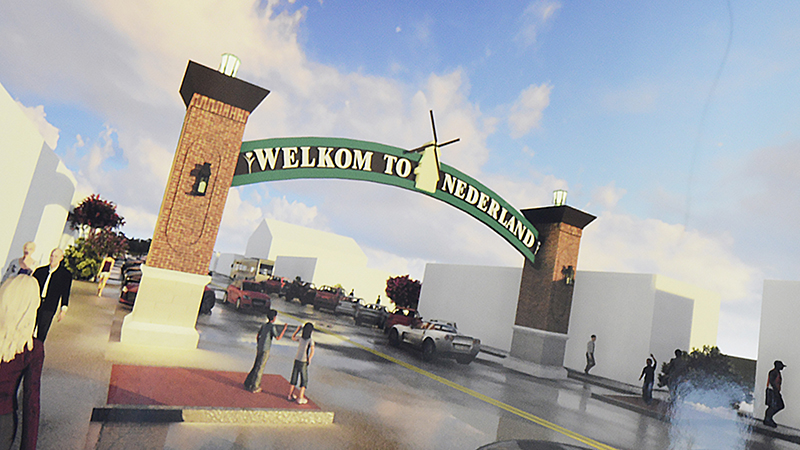 The Gateway Arch to Nederland includes the “Welkom to Nederland” message on two sides in tribute to the city’s Dutch heritage.

Officials said there was only one plausible location that avoided existing power lines, electrical outlets and traffic lights.

Construction will cause the elimination of one non-handicapped parking spot and is slated to cost $179,200 of EDC funds. The project must receive final City Council approval, with that vote scheduled Monday.

LED lighting includes lamps on the east-facing side of the pillars and dome-shaped lights on top of the pillars to match a previous EDC effort on Boston Avenue.

The red brick will come from Acme Brick, and construction materials include black medal at the top and bottom of the pillars.

The height at the center of the arch is 17 feet, 2 inches, providing clearance, EDC officials said, for Nederland fire trucks and all vehicles approved for TxDOT roads.

“People come to Boston Avenue and visit the museums on the other end but sometimes don’t go all the way from the Acadian house and Tex Ritter Park to shop at the other end,” EDC Executive Director Kay DeCuir said. “This gives you something to start at this end and flow into all the businesses. It’s just another way to attract tourism.” 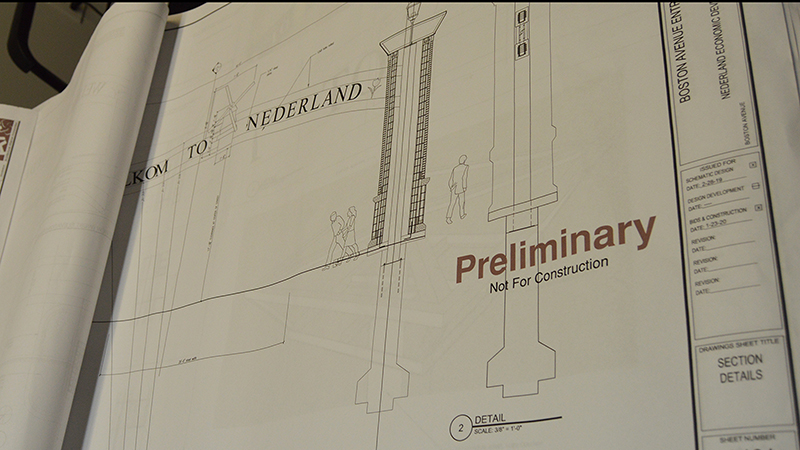 A preliminary blueprint of the Gateway Arch to Nederland shows just how deep into the ground the structure will be secured for safety and stability purposes. (Stephen Hemelt/The News)

Both sides of the arch contain the “Welkom to Nederland” message, and the columns on the west side include room for a mural on each pillar.

“People like murals and like to take their photos by the murals,” DeCuir said. “This is going to attract more business to downtown. We’ll have different murals on each side. We’re working on what we are wanting an artist to do. Of course, it will be a local artist. Probably one side would be representative of our heritage.”

EDC Board President Brian Swindel said Boston Avenue has become a significant shopping zone and having an archway creates a welcoming atmosphere.

“It shows the city pride and history,” he said. “It’s going to be well lit. It keeps the growth going with a grand entrance.

“The role of the EDC is to drive growth. How does that tie in and benefit existing businesses and create new businesses? This helps draw people in.”