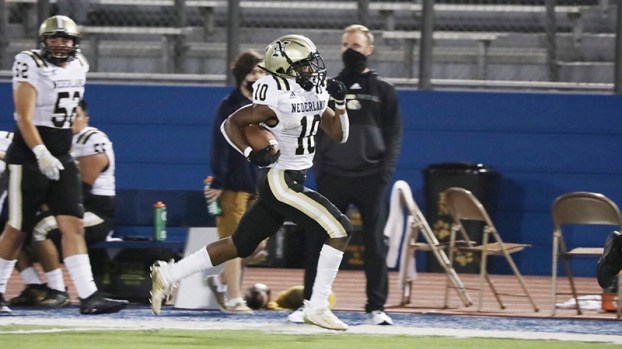 The Nederland Bulldogs continue to “adjust and overcome.”

Head coach Monte Barrow said the phrase has been the team’s mantra all year.

Days before the season was scheduled to begin, Nederland was forced to cancel its game against Huntsville due to a coronavirus outbreak within the team.

The following week, Houston Austin cancelled it match against Nederland due to concerns surrounding the Bulldogs’ outbreak.

The Bulldogs scrambled to find a new opponent in Lufkin to open the season. After dropping the game 31-28 to the Panthers, the Bulldogs drove three hours on a Saturday for a bounce-back game against Jacksonville to conclude their non-district season.

Next the Bulldogs lost in a heart-breaking 22-21 contest to rival Port Neches-Groves. The Bulldogs, who had not beaten PNG since 2016, had the game wrapped up and were running out clock when senior running back Josh Mazyck fumbled, giving the Indians the ball back with a chance to win, which they did in the game’s final seconds.

Since, Mazyck has dominated the district along with the rest of his teammates. Following the loss, Barrow said they did not want to lose the same game twice, meaning the Bulldogs did not want one loss to cause them to lose to another team.

The Bulldogs have not lost since, winning six-straight district games.

With three games left in the season, the team knew that if they won out, they controlled their destiny with a shot at a share of a district title, which Nederland had not won since 2017 when they split the title three ways with Vidor and Memorial.

In the final week of the season, the Bulldogs traveled to Crosby to face the Cougars, who entered the game undefeated in district and had won their last four games by a combined score of 200-37. Nederland won the game 29-24 with a last-second fumble recovery to seal the win and Nederland’s place at the top of the dog pile.

I really wanted to write “road dogs” so many times, but was saved by the wise decisions of my editors. One might say I was like a dog with a bone. Okay, I’m done.

The Bulldogs now enter the post season with an explosive offense and a defense with a knack for making plays.

More importantly, there is not much anyone can throw at Nederland, for which they have not already prepared.

“With this team, you almost don’t want anything the same two weeks in a row because of the way this season has been,” Barrow said.

He believes in his players and more importantly, they believe in themselves. Nederland has not won more than one playoff game since 2012. With the hot streak they are riding, the Bulldogs have a real chance to make some noise.

Analysis: COVID-19 vaccines are coming to Texas, along with a ranking of who’s most essential

Who gets the first batch of vaccines? And the second, and the third? This political snaggle starts with very good... read more