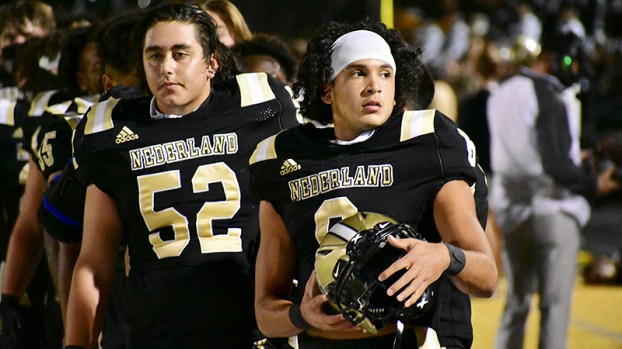 Seniors Mason Minnis (52) and Rene Cunningham (6) will line up on the Bulldog Stadium field one more time for a Thursday night bi-district playoff. (I.C. Murrell/The News) 11-6-20

NEDERLAND — The Nederland Bulldogs are red hot as they enter the playoffs on a six-game win streak after defeating the Crosby Cougars on the road Friday.

Barrow said the team’s mantra has been “adjust and overcome.”

“We’re are excited about playing in the playoffs. Period,” he said. “Thursday is great.”

The Bulldogs’ only losses of the season came during their first game of the season against Lufkin, which was the team’s first game after a coronavirus outbreak sidelined several players. Their only other loss came at the hands of Mid-County rival Port Neches-Groves in a 22-21 thriller in the district opener.

“We just talked about how we are trending in the right direction,” Barrow said. “We’re moving upward, not just with our record, but with our play. We looked at some teams in the past that were doing that and saw that we have a good opportunity to make a run in the playoffs. We have to take advantage of the opportunity, not unlike last Friday night.”

The Bulldogs will face a Raiders squad on the other end of the spectrum after losing their last two games to Fort Bend Willowridge and Fort Bend Marshall, respectively. The Raiders lost 69-14 to Marshall in its most recent game Nov. 27.

“They have a big, big, big quarterback,” Barrow said of Sterling. “I don’t mean big as in fat. I mean big as in a nice-looking young man who can move around. He is very athletic with a big arm, like the Crosby quarterback from last week. We’ll have to do a good job of trying to keep him on his spot.”

The Raiders use multiple fronts on defense to confuse opposing offenses, Barrow said.

“You turn on different games and they are in different fronts with different coverages,” he said. “You have to prepare for all of them, but if you prepare too much, you aren’t spending time getting better at any of them. We’ll narrow it down to what we think they will try to do, but we have to go out, be ourselves and do what we do.”

Barrow said not having to get on a bus for a playoff game is a huge advantage.

“You know the routine. You know the dressing room,” Barrow said. “All of those things help. Your fan base of people who can’t travel or maybe don’t want to in this time, and on a Thursday, can come to the game. It’s great to be in Bulldog Stadium anytime you can.”

The winner takes on second-seeded Pine Tree or third-seeded A&M Consolidated in the area round next week.

A Nederland tank terminal may soon serve as a control center for a deepwater port in the Gulf of Mexico.... read more