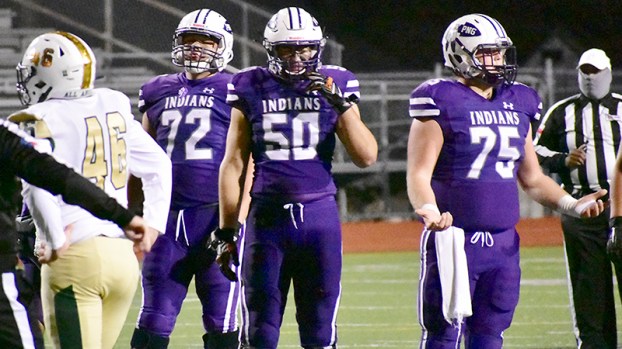 PORT NECHES — Often, when analysts talk about offensive and defensive line play in football, they use the phrase hand-to-hand combat to highlight the importance of the use of hands in a lineman’s technique.

Port Neches-Groves senior offensive lineman Corey Burt takes the phrasing literally. When he is not using his hands to fend off oncoming defensive lineman, Burt is using them to practice mixed martial arts.

“I’ve been training for a month and a half,” he said. “It was something I would very much like to pursue in the future.”

Burt is waiting for the pandemic to die down before trying to schedule any amateur fights.

He said technique is key when having to move around on the offensive line.

“A good lineman needs to stay disciplined, especially in his pass pro[tection],” he said. “It’s very important with your steps and remembering what you have been taught.”

Burt has started at tackle and guard for PNG this year. Head coach Brandon Faircloth said Burt’s experience has been invaluable.

“He’s been on varsity three years,” Faircloth said. “He’s played a few different positions for us. He normally starts at guard, but we’ve had some injuries at tackle and he has stepped in there. He is very versatile. He brings that senior leadership to our o-line group.

“He never has a bad day,” he said. “Corey always has the energy. He is always a great practice guy and it showed in the games this year, because he has played really well this year, too.”

Faircloth said Burt has all of the tools of a good lineman.

“He is relentless,” Faircloth said. “He plays with great effort and he is a technician. He cares. Anytime you have a guy like that on the offensive line, it gives you some flexibility if there are injuries. He could probably go play center, as well. To be able to play those spots and know who to block on all the plays we run, is really impressive and shows how high his intelligence is.”

Burt can’t choose a favorite moment or game from his time playing football, saying they “are all pretty special.”

Burt, along with his fellow seniors, played his last game at The Reservation in a must-win 41-7 victory over Santa Fe last week to propel the Indians into the playoffs.

The lineman will miss the crowd.

“The crowds have been pretty wild,” he said. “It is captivating and it blows your mind to see that they are there to see you. It is pretty wild.”

Burt remembers the first time he ran out on the field as a varsity player his sophomore year.

“It felt like a child in a candy store,” he said. “It was pretty cool.”

Burt is confident about getting the chance to keep playing.

“I feel like another game is another win,” he said. “That would go a long way to changing the outcome of our season.”

The winner plays either second-seeded Montgomery or third-seeded Whitehouse.