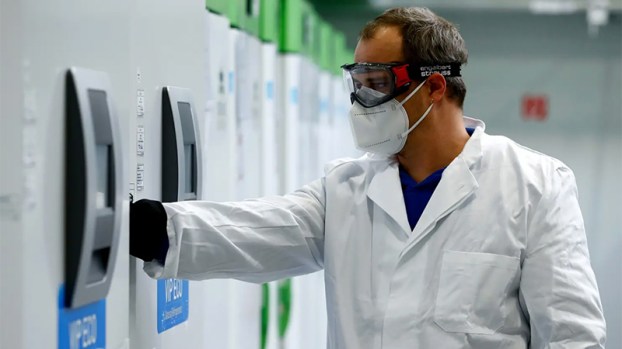 An employee opens an ultra-cold refrigerator filled with COVID-19 vaccines at a secret storage facility in the Rhein-Main area in Germany. (REUTERS/Ralph Orlowski)

Analysis: COVID-19 vaccines are coming to Texas, along with a ranking of who’s most essential

Who gets the first batch of vaccines? And the second, and the third?

This political snaggle starts with very good news. By mid-month, Texas will get up to 1.4 million first doses of the two-dose coronavirus vaccine candidates from Pfizer and Moderna, Gov. Greg Abbott said Wednesday.

That’s not enough for everybody in a state with 30 million people, and state officials have said health care workers will be first in line for the shots, followed by nursing home staffers, emergency medical service drivers, and paramedics and home health aides. The list goes on, and if you think about the numbers, it’s no surprise that most of us aren’t on it.

This pandemic won’t last forever. But it will continue while the Texas Legislature convenes to talk about COVID-19 responses and everything else. Every constituent who’s not on the early vaccine lists will have a ready audience — if not an eager one — to make a plea for a place closer to the front of the line.

Teachers are already making a compelling case. Many of them are required to teach in person, just as if the pandemic had never arrived. Some of them have underlying conditions that make exposure to the coronavirus riskier. Maybe they should be vaccinated so they can concentrate on educating children instead of weighing whether their jobs are worth the health risks.

It’s an understandable argument, and that’s why this could develop into a political hot spot. It’s fair to say there are more than 1.4 million Texans who could make compelling arguments about why they should be vaccinated sooner rather than later. Health workers already have the best spot in line — an easily defended decision to protect the people whose exposure is greatest.

You can make a list of your own for the people who ought to be early vaccine recipients, and some are already there. The numbers pile up. Early estimates from the Texas Department of State Health Services include more than 638,000 health care personnel; more than 327,000 acute care hospital employees; more than 137,000 nursing home residents; and more than 66,000 emergency medical workers. There were 365,564 teachers working in Texas public schools during the 2018-19 academic year, according to the Texas Education Agency; 79,508 certified peace officers, according to the Texas Commission on Law Enforcement; 71,377 certified or licensed first responders, according to the Department of State Health Services; and millions more people at high risk because of their work conditions — think of outbreaks at meat-processing plants and prisons — or their health conditions.

It’s going to be impossible to keep everyone happy and also to treat everyone in a way they think is fair. Too many will see “fair” as getting an early vaccine shot, and “unfair” as someone else getting one. That’s before you include lists of celebrities, executives, politicians and others who are accustomed to first-in-line status.

The rationing won’t last long, hopefully, if vaccine manufacturing is speedy enough. But it will take months to take care of everyone. The health news here is great; these vaccines were developed quickly, and the public health machinery, in this regard, appears to be doing a terrific job. It puts politicians in a pickle, though, because there’s not enough for everyone right now.

The New York Times and others developed a pretty cool tool that calculates a person’s place in line based on geography, health and demographic information. Trying it at home can be awkward: You might find that not everyone in the family is in the same place in line. That ought to make for interesting conversation at the dinner table.

The bigger, figurative dinner table — the civic one — is already getting interesting. The question of who is and is not on the front line loudly echoes last spring’s debates over which businesses are essential and which ones are not. We’re still working out the political consequences of closing and opening bars, hair salons, movie theaters, stadiums and all the rest.

Getting vaccinations for everyone who wants them appears, at the moment, to be within reach. But it will take a while, and the people delivering the shots will have to make rules for who goes first. We’ll get there, but it’s going to be uncomfortable.

Ross Ramsey is executive editor of The Texas Tribune is a nonpartisan, nonprofit media organization that informs Texans — and engages with them – about public policy, politics, government and statewide issues.

The Memorial Titans capped off their first undefeated regular season in the school’s 19-year history with a 46-28 win over... read more