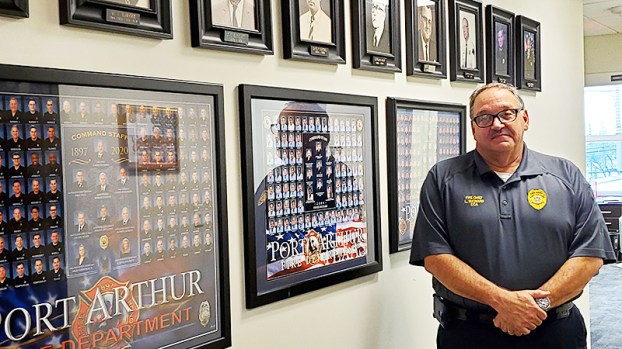 After a career spanning more than 39 years, Larry Richard is finally ready to retire.

His retirement as Port Arthur fire chief, a title he earned in 2004, doesn’t become official until 6 p.m. Jan. 4, after which he and wife Linda will do some traveling.

Richard is ninth in a line of Port Arthur fire chiefs that dates back to 1897 and the city’s first fire chief, Frank Trost, known for his famous photograph of the Lucas Gusher at Spindletop.

A lifelong Port Acres resident, Richard became a firefighter because he needed a job.

“That’s the God’s honest truth,” he says. “I was hired in 1981. It was tough back then and unless you knew somebody at one of the refineries, you weren’t gonna get in. Basically with the fire department, you took a civil service test and it’s based off of your score.”

A 1979 graduate of Stephen F. Austin High School, Richard was 20 when he was hired.

What he might not have expected is how much he would enjoy the job.

“The original plan was to come here and be a firefighter until something came along, but once I got here and started doing the job, it’s like I couldn’t believe they paid me to do it,” he said. “It became a career, not a job.”

Just 20 days into his new job Richard married his wife, and the two spent their honeymoon in Houston over two days because he had to be at work on Monday.

Battalion Chief Patrick Murphy, who is in his 49th year as a firefighter, called Richard a good man.

In their heyday, the two worked on a call of a fire on a shipyard barge.

“We got down the side of the barge and started going through it looking for the fire,” Murphy began. “The air packs were very limited at the time as far as air consumption. We got deep inside there and, thankfully, we had something to fall back on. The air packs started getting low and the alarm started sounding. It got hairy but we made it out. It was a good learning experience for both of us.”

Stephen Curran, who served as fire chief in Port Arthur before moving on to serve as fire chief in Port Neches, worked alongside Richard. When Richard was training battalion chief and Curran was deputy fire chief under then-Chief Clifford Barbay, the two decided they needed administrative training that Barbay didn’t especially want anyone to go to.

The two “conspired” and registered for the training without Barbay knowing, Curran said.

“At the time, we thought, ‘winning,’” Curran said. “The thing we didn’t realize was, that before we had a chance to get it authorized by Chief Barbay, the bill had already landed on his desk. Oops, all I can say is that was a fun conversation. Chief Richard learned well from that exercise and after I made Fire Chief, he managed to order a new emblem (somewhat expensive) for a new fire truck, which was on order and is now on all the Port Arthur Fire trucks. It was my turn to get set up.”

Curran also recalled how, after he made chief and appointed Richard as his deputy chief, he left a few months later to go to Port Neches.

“I assured him that he would be the most capable to take the helm,” Curran said. “He hasn’t let me forget that I left him unexpectedly as the next fire chief. It turns out that Larry is a firefighters’ fire chief.”

Richard also remembers this, saying Curran appointed him as his deputy chief and promptly left.

“Originally I thought I’d be deputy chief for five, six, seven years and maybe evolve into the chief’s position,” Richard said with a laugh. “It was literally probably a year. It was a learning curve.”

“Through all of the human-made and natural disasters, through the many budget challenges, and the always delicate task of dealing with personnel problems, he exhibited a degree of calm, restraint and a consideration of the human-side of the situations, which impressed me,” Avery said.

“In particular, in dealing with personnel who were in some kind of department disciplinary trouble, I have observed him tolerate at least some degree of impertinence while trying to preserve both the department’s interests and yet pull the employee back from the edge. It takes a person with a bigger heart than mine for that kind of self-command.” 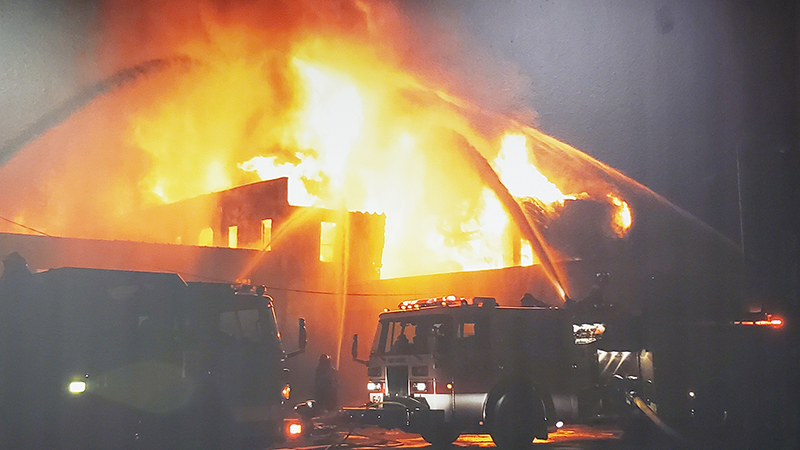 Richard’s dedication to the job is no secret.

“Chief Richard is certainly going to be missed. The city of Port Arthur has definitely been fortunate to have him as a fire chief,” Doty said. “Chief Richard is smart, level headed, a family man and a God-fearing leader. I’ve heard so many of the firefighters say the same thing. We sure are going to miss him.”

Deputy Fire Marshal Antonio Mitchell has worked for Richard for the past 16 years.

“He’s just a great person to work alongside. He’s so compassionate about the fire service in Port Arthur and he truly, truly cares about the citizens of Port Arthur,” Mitchell said. “He’s not here to collect a check and go home. One of the best things is that he’s there. We see him every day and interact with him.”

The job of a firefighter has evolved through the years.

The 9-1-1 call system was not yet available in Southeast Texas when Richard came on board, but since then it has upped the responses and medical training of the fire department.

PAFD and other local fire departments dispatch not just to fires. Emergency medical service type calls are approximately 80 percent of what they make.

The fire department has a number of special teams to handle the array of calls. One is the High Angle Confined Space Rescue Team, of which Richard is an original member. This team is ready for calls in the petrochemical plants — though each plant/refinery typically has its own fire department.

“Our dive team has evolved from basically guys who had sport SCUBA (training) and are now certified public safety divers, and our Hazmat team is second to none in our area as far as I’m concerned,” he said.

PAFD got its first bomb detection dog shortly after the Columbine High School shooting, as there were calls of school bomb threats locally. The department has had a number of such dogs since.

Equipment is much better now, Richard said, looking over a career of changes.

“My first bunker coat, I had the sleeve almost rotted off on me when I was in the academy,” he said.

“That’s the way the times were back then. There just wasn’t the technology to make this stuff. Nomex was just coming on the scene. And of course regulations have changed through the years. I think we’re a lot safer department, but we respond to a wider range of hazards now.”

One of the things he’s most proud of is the department’s ISO Rating. A fire department’s Insurance Services Office ratings ranges from 1 to 10, and PAFD’s is 2.

Like many residents Richard didn’t have much experience with hurricanes until Rita in 2005. There were hurricane threats but the storm would usually move in a different direction.

Richard has dealt with several hurricanes and was forced to leave his wife to take care of professional tasks.

“Rita was a learning experience,” he said. “We had plans in place but they had never been tested and with each disaster we really learned. Of course the department is evolving. People are retiring and new guys coming in. Some of that disaster experience is lost but we’ve had so many disasters even the young guys are getting a taste for it.”

He remembers he and now retired firefighter Wayne Roccaforte traveled for a week to New Orleans to assist after Hurricane Katrina. Once he got back he told his wife he hoped we’d never have a hurricane. Then about a week later he was preparing for Rita.

Of his years with the department, the fire at the vacant KBTV Fox 4 building is the one that sticks out in his mind.

“We came really close to having fatalities in that fire. We had four people inside the building when it collapsed,” he said of the Feb. 2, 2009, fire at 2900 17th St. “It was a horrible feeling two of them made it out and immediately realized there were two more inside. We went back in and found the other two guys and brought them out. Probably one of the most heroic things I’ve seen. There was no hesitation, just turned around and went back in. When all four came out I just … kind of sat there and thanked God. It was probably one of the scariest things I’ve ever seen.”

With so many missed opportunities at trips and vacations, Richard is ready to do some traveling.

They already have had several cruises canceled due to the coronavirus pandemic but he has cruise credits waiting.

A big Alaska cruise has been rescheduled to August.

“Who knows, if nothing else we’ll get in the car and take off like we did with the last vacation and have a good time,” he said.

Richard is confident the department will go on as it has for well more than 100 years.

“This department will go like I was never here the day after I leave,” he said. “That’s how things are set up. It’s bigger than any one person.”

A Beaumont woman was indicted on a charge of intoxication manslaughter for striking and killing a pedestrian at a car... read more