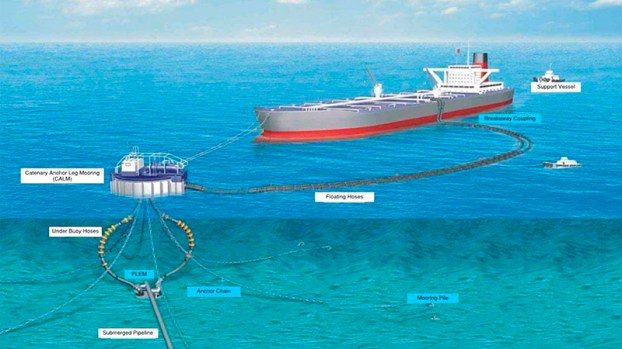 A Nederland tank terminal may soon serve as a control center for a deepwater port in the Gulf of Mexico.

Blue Marlin Offshore Port LLC submitted an application to the Maritime Administration (MARAD) and the U.S. Coast Guard to construct a deepwater port 99 statute miles off the coast of Cameron Parish, Louisiana.

The project includes an approximately 37-mile long, 42-inch diameter crude oil pipeline to connect the Nederland terminal through Orange County to a 36-inch Stingray Pipeline at Station 501 in Cameron Parish. The port would be designed to transport crude oil and load it for export.

Energy Transfer is the parent company of Blue Marlin Offshore Port LLC and operates the Nederland terminal. Attempts to reach an Energy Transfer spokesperson about the project and its local impact were unsuccessful.

According to Blue Marlin’s project overview, two above-ground stations in Cameron Parish from natural gas to oil service along the existing Stingray Pipeline, as well as the pipeline itself from natural gas to oil service (including an interim platform), and a platform complex from natural gas to gas and oil service will be converted upon approval of the project. The facilities will be designed to move 80,000 barrels per hour, capable of exporting light to heavy crude oil, monitored around the clock from operation staff at a Cameron Parish platform complex and the control center in Nederland, and load out as many as 365 crude oil carriers per year. 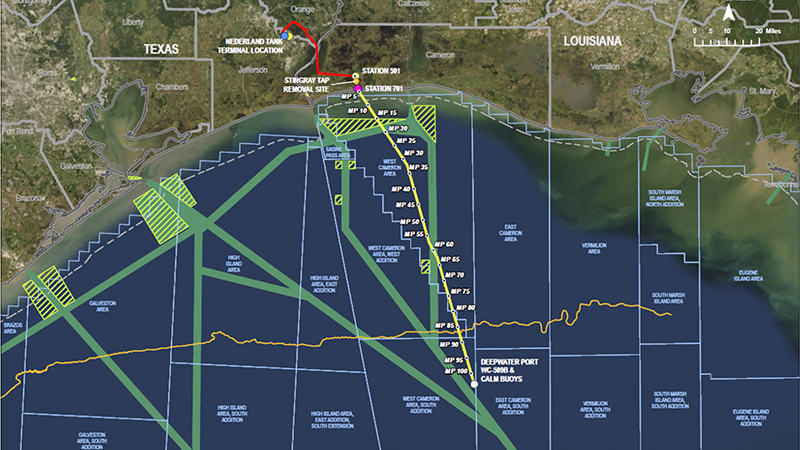 An overview map of the Blue Marlin Offshore Port project. The red line represents proposed onshore pipeline from Nederland to Cameron Parish, and the yellow line represents existing pipeline to be converted to oil service. (Image via Maritime Administration)

Today (Dec. 5) is the final day for public comments to be taken through the Federal Docket Management System via website (regulations.gov) or fax (202-493-2251). Commenters are asked to include the docket number MARAD-2020-0127.

A representative for Healthy Gulf, a research group focused on protecting natural resources in the Gulf of Mexico, stated a concern, however, the Blue Marlin project would not be in the national interest. Naomi Yoder said national interest needs to be proven for the license to be issued.

“The cumulative impact of fracking and transport and storage of fossil fuels is not evaluated thoroughly,” Yoder said. “The cumulative effect of pollution has not been effected and must be evaluated before any application can be considered fairly or licensed, granted or denied. The license should be denied until the requirements are fufilled.”

MARAD has stated it will issue or deny the license based on the following criteria in the Deepwater Port Act: financial responsibility; compliance with relevant laws, regulations and license conditions; national interest; international navigation; impact on the marine environment; national environmental laws; consultation with secretaries of the Army, state and Defense; governors’ approval and consistency with coastal zone management.

The Coast Guard, in coordination with MARAD, is preparing an Environmental Impact Statement (EIS) for the proposed project in accordance with the Deepwater Port Act, National Environmental Policy Act and applicable regulations.

MARAD is an agency of the U.S. Department of Transportation.

A draft of the EIS is tentatively expected by March 2021, and a public meeting for the draft would be established by April. Following a final EIS, the governors of Texas and Louisiana would make a decision by a projected date of August 2021, with MARAD to record its decision by that September.

John Beard, chairman of the Port Arthur Community Action Network and a petrochemical expert, hopes the project will not create pollution in the Gulf.

“Too many of these projects have not been diligent in avoiding creating pollution and problems,” Beard said. “They’ve not done a very good job of oversight. Until we get management and oversight to where they’re in complete compliance with the law, this project probably shouldn’t be approved.”

Beard added he’s afraid taxpayers may be stuck with the bill if Blue Marlin is approved and then goes out of business. Financial responsibility is one of the criteria MARAD uses for issuing (with or without conditions) or denying the license.

Beard also wants Blue Marlin officials to consider “environmental, cultural and recreational sensitivities” in the area; otherwise, he said, it’s probably best for the port not to be approved.

BEAUMONT — Murray Melvin Odom, 42, was indicted last week by a Jefferson County jury for the shooting death of... read more