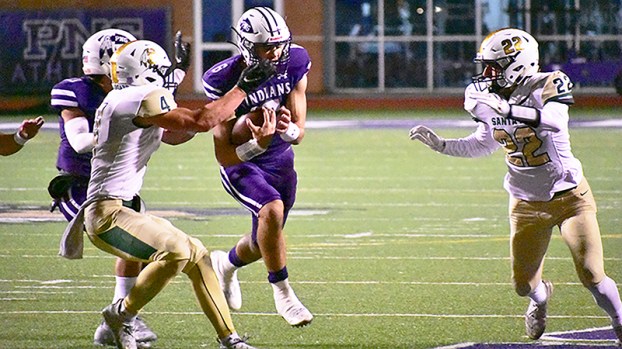 PORT NECHES – The Port Neches-Groves Indians defense gained a measure of redemption on Friday night, and in the process carried PNG into the postseason with a dominant 41-7 victory over the visiting Santa Fe Indians at The Reservation on Friday night.

One week after surrendering 60 points and more than 600 yards in a loss to Texas City, the PNG defenders limited Santa Fe to 250 yards, losing the shutout with 4:24 remaining in the game, well after the outcome was decided.

PNG’s win, combined with Barbers Hill’s win over Texas City, ensured that the Indians locked up the fourth and final playoff spot in District 9-5A Division II. The Indians ended the regular season at 5-5 overall and 4-3 in district play. 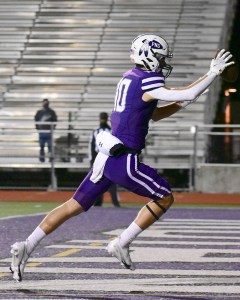 PNG receiver Grant Pearson runs into the end zone for a touchdown against Santa Fe in the second quarter Friday. (I.C. Murrell/The News) 12-4-20

The PNG defense came up with three interceptions on the night, as Santa Fe ended its year at 2-8 overall and 1-6 in the division.

PNG scored on each of its first three possessions in the first half to take control of the game.

Quarterback Blake Bost threw two touchdown passes to Grant Pearson, a 39-yard strike with 7:14 remaining in the first quarter, and a 13-yard toss just 22 seconds into the second quarter. Bost closed out the first-half scoring on a 1-yard plunge with 4:06 left in the half. Tate Sandell added the PAT after all three scores.

Bost threw two more TDs in the second half, an 8-yard toss to Pearson and a 1-yard jump pass to Ryan Sosa. PNG’s last touchdown came when two JV call-ups combined for a score. Cole Crippen threw an 18-yard TD pass to Cooper Faircloth with 1:26 remaining in the contest.

For the game, PNG had 423 yards of total offense, collecting 24 touchdowns along the way.

PNG took a 7-0 lead on its first possession of the game. The Indians took control early and never looked back.

The PNG defense, which bounced back with a strong effort following last week’s loss at Texas City.

Santa Fe actually won the time of possession battle 25:41 to 22:19. A big reason for that was the quick-strike capability of the PNG offense.

PNG will visit Fort Bend Marshall at 7:30 p.m. Dec. 10 at Hall Stadium in Missouri City for the bi-district round.

A win on Friday against Friendswood in Memorial Stadium gives the Titans the first undefeated regular season in the school’s... read more