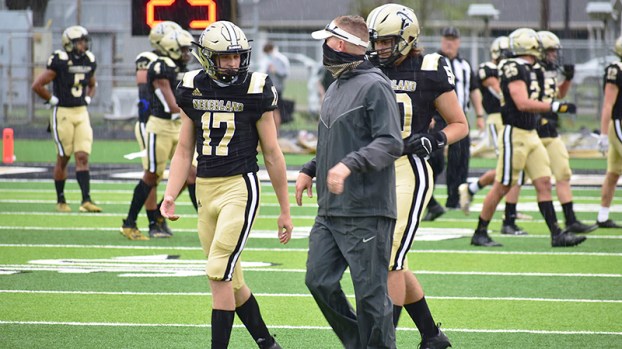 NEDERLAND — Nederland’s matchup against the Crosby Cougars has a chance to be a shootout as two of District 12-5A Division II’s most explosive offenses go head-to-head Friday.

The top rated Crosby defense could have their hands full with the Nederland offense, which ranks third in the district in yards per game.

Nederland running back Josh Mazyck ranks second in the district in rushing yards but first in yards per carry with 9.05. That average was helped last week when the senior broke touchdown runs of 51, 56 and 48 yards, respectively, in the Bulldogs’ 42-9 win over Kingwood Park. Mazyck finished the game with nine carries for 171 yards. Mazyck is tied for second in the district with 16 rushing touchdowns.

Bulldogs junior receiver Kyndon Fuselier is second in the district with 923 yards and first in average yards per catch with 25 and a league-leading 12 receiving touchdowns. Against Kingwood Park, Fuselier had receptions of 60, 38 and 22 yards and one touchdown.

The junior nearly had another touchdown and about 60 more yards if he had not slipped on the rain-soaked turf after catching the ball when the Bulldogs were pinned on their own 1-yard line.

“For an offense, this is what you want every year,” head coach Monte Barrow said. “I don’t think it is something that we went in and changed and said we want to be more explosive this year. A lot of that credit goes to the kids that are out there doing it. The guys that are touching the football can go the distance.

“It starts with the quarterback (Rene Cunningham),” Barrow said. “He can get down the field to the guys that make the plays and he can run it. Then, we are handing it to Josh, who has proven his abilities and big-play capabilities. He’s done it for three years.”

Barrow credited the receiving corps and the offensive line for the team’s big plays.

It’s fun to coach the athletes Nederland has, Spell said.

“They are dynamic, but they are also really tough kids,” according to Spell. “When you coach guys with their God-given talent that are willing to work the way that they are, it makes it exciting to come to work every day. It’s been a lot of fun to get creative and find a way to get those guys in matchups.”

Barrow said slowing down the Cougars offense is like picking a poison.

“They try to have a car wreck every play,” he said. “They are physical upfront. They have six guys just causing chaos. Our line will be up for the challenge. We’ve seen some physicality this year.”

Barrow said the keys to beating the Cougars start early in the week.

“You can’t wait until Friday night,” he said. “You have to start winning Monday. That means showing up on time and not being five seconds late to meetings. You have to pay attention to every rep in practice. All of those little things add up. If you can take care of those things Monday-Thursday, it will take care of itself on Friday.”

As with everything else in the year 2020, Texas high school basketball is facing unprecedented times. The uncertainty of the... read more