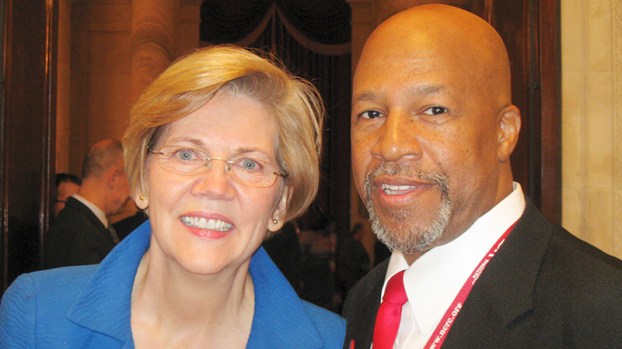 A Port Arthur man who heads Texas AgriForestry Small Farmers and Ranchers (TASFR) is pushing for Congress to put an end to discrimination against Black farmers and ranchers and help a new generation of those who are socially disadvantaged thrive in the business.

According to a news release from Booker’s office, there were 1 million Black farmers in the U.S. in 1920, but less than 50,000 remaining 100 years later due to discrimination.

The Justice for Black Farmers Act, if signed into law, would enact policies designed to end discrimination within the U.S. Department of Agriculture, protect remaining Black farmers from losing land, provide land grants to create a new generation of Black farmers and restore the land base that has been lost, and implement systemic reforms to help family farmers across the U.S., according to the release.

Mills hopes the act establishs a system of restoration and reparation for African American farmers and ranchers. Under the act, the USDA would purchase land of up to 160 acres to eligible Black individuals (21 years or older) at no cost, and “if a sufficient number of applications are filed,” the bill reads, at least 20,000 land grants would be transferred each year from 2021-30.

“The end goal is obviously to make farming and ranching hole by setting aside a land grant entity that would work with them to help them make their land productive, but also to have a mechanism would be key,” Mills said. “When you participate in a USDA project, you have to come up with a cost-share amount. If a farmer had $20,000 to $30,000, they wouldn’t need the project. Most farmers and ranchers don’t have that operating capital, so you’re at a disadvantage right off the bat.”

It also seeks to create a Farm Conservation Corps that would help educate adults ages 18-29 in their pursuit of a farming or ranching career. Participants would serve at no cost to socially disadvantaged, beginning and organic farmers and ranchers with an annual gross farm income of up to $250,000, and would be compensated by the USDA.

Black participants who go through the program would have priority for land grants, and “substantial resources” would be provided to historically Black colleges and universities.

“Overtly discriminatory and unjust federal policy has robbed Black families in the United States of the ability to build and pass on intergenerational wealth,” Booker said. “When it comes to farming and agriculture, we know that there is a direct connection between discriminatory policies within the USDA and the enormous land loss we have seen among Black farmers over the past century. The Justice for Black Farmers Act will work to correct this historic injustice by addressing and correcting USDA discrimination and taking bold steps to restore the land that has been lost in order to empower a new generation of Black farmers to succeed and thrive.”

“For decades, racist policies have robbed Black farmers of the economic opportunity to thrive in our country’s agricultural industry,” Warren said. “I’m glad to cosponsor Senator Booker’s bill, which goes a long way toward restoring and protecting property rights of Black farmers, rooting out discriminatory policies, and providing Black farmers with the necessary tools to succeed.”

The USDA would pay participants who would serve as on-farm apprentices at no cost to socially disadvantaged, beginning and organic farmers and ranchers with annual gross farm income of less than $250,000 under the bill, according to Booker’s office. Black participants who gain experience through this program will have priority for land grants.

The TASFR is established as an outreach entity to assist small ranchers and farmers with USDA programs. Mills said his association, which serves 50 counties in East and Southeast Texas, works to provide them with information about the programs.

“We can only bring that information to them, but they’re the ones who’ll have to participate in the program, but we have to get over the issue of trust,” Mills said.

Communication and technology are vital for St. Catherine of Siena School leaders working on a daily basis to protect children from... read more