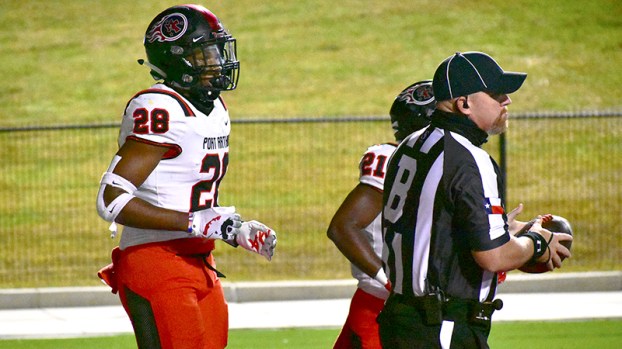 Memorial junior running back Adrian Hayward admitted he was a handful as a freshman. In the ninth grade, he was only two years removed from his mother’s death and was young and angry.

“My mom passed when I was in the seventh grade,” Hayward said. “I took that kind of hard. That was my first lady. She taught me most of the stuff I know. My father wasn’t really around. My uncle and my aunty, they played the role of my parents from when I was born to now. They have helped me a lot.”

“AJ is another one of those guys who has grown up a ton since his freshman year,” Morgan said. “I think his background has made it to where it is hard for him to trust people. I think it took a lot of time to build that trust. I think it was about halfway through last year, it finally started to click. Once he realizes you are on his side, want what’s best for him and that you are going to go to war for him, he will do the same for you.”

Hayward said he loves playing for the Titans.

“I feel like we play as one and as a family,” he said. “When I first came here, I had a bad attitude. Coach Morgan and the other coaches really helped me with it. He helped me with school, as well. Growing up as a kid, growing up hard, this school has really changed me. For me, playing for this team is really big in my life.”

The running back credits his uncle and aunt for helping him with his emotions.

“I had a bad attitude,” he said. “Now, I don’t have it anymore. I’m much more respectful — sometimes. When I want to be. They have taught me a lot and have gotten me ready for the real world.”

Hayward said his grandfather makes sure the junior stays busy by helping the elderly on off-days.

While his grandfather keeps him busy off the field, Morgan and the Titans offense keep Hayward busy on the field.

The Titans (8-0, 6-0 in 9-5A-I) often take the field with both running backs, lining up either one in the backfield or in the slot receiver position.

“We run the same offense no matter who is at what position, but we do try to cater a bit to their skillsets,” Morgan said. “You can line them up all over because they are both really smart players.”

Hayward said the team’s success is brought on by the group’s closeness.

“You can’t play without each other,” he said. “If you play as one and play as a brotherhood, it will all come out well and a win.”

The Titans will try to get one more win to complete a perfect regular season as they take on Friendswood. Kickoff is set for 7 p.m. Friday at Memorial Stadium.

JODY HOLTON — Senior drivers, knowing when to leave driving to others

As we age, Arthritis, which is common among older adults, might affect our ability to drive. Our joints may get... read more