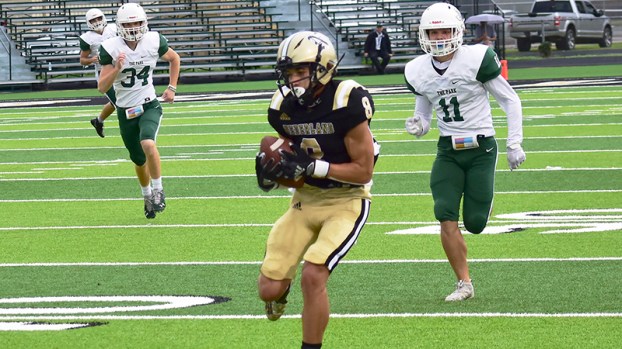 NEDERLAND — Big plays fueled the Nederland Bulldogs as they defeated Kingwood Park 42-9 in a downpour at Bulldog Stadium Friday.

The win sets Nederland up for bout District 12-5A Division II against Crosby for the No. 1 seed Dec. 4.

“That is all you can ask for,” Nederland head coach Monte Barrow said. “You do all of the work just to get the opportunity. We talked about that after the gaem. You show up Monday and it’ll be different. It will be different than any other Monday we’ve shown up because it will for a (share of a) district championship.” 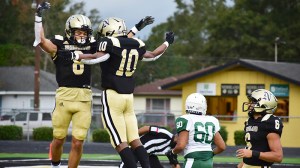 After holding the Panthers to a field goal on the opening drive, Nederland wasted little time taking the lead as quarterback Rene Cunningham found receiver Kyndon Fuselier for a 60-yard strike.

The weather made a turn for the worst after the touchdown, making both offenses stick to their respective ground games.

Nederland running back Josh Mazyck did most of his damage on long touchdown runs of 51 and 56 yards. On his first carry of the second half, he ran for another 48 yards for his third score of the day.

The Bulldogs longest drive came in the third quarter after a well-placed punt pinned them on their own 1-yard line. Nederland used 12 plays and took more than 7 minutes off the clock before Beau Seymour punched it in from 1 yard out to make it a 35-3 lead late in the third quarter.

The Bulldogs’ starters would not return in the game.

“It’s hard to prepare for that,” Barrow said of the weather. “It is more of a mindset than anything else and I thought our kids did well in that aspect.” 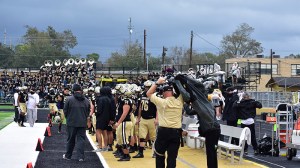 After the Panthers got on the board first with a 22-yard field goal, the Bulldogs snatched the lead with a 60-yard pass from Cunningham to Fuselier with 7:59 left in the first quarter. The Bulldogs did not look back, scoring 42 unanswered points.

“It seemed like every time we touched the football, it started to rain a little harder,” Barrow said. “They were making stops up front. We just kept pushing and our line was picking up some things. Josh was able break a few long ones, which was big.”

Mazyck, who finished the game with nine carries for 171 yards and three touchdowns. He did not play the entire fourth quarter and some of the third.

Fuselier finished the game with three catches for 120 yards and a TD.

Nederland will go on the road to take on Crosby for at least a share of the district title. Kingwood Park will host Dayton. Both games are set for 7:30 p.m. Dec. 4.

A man was treated and released from a local hospital after a shooting Friday afternoon in Port Arthur, authorities said.... read more