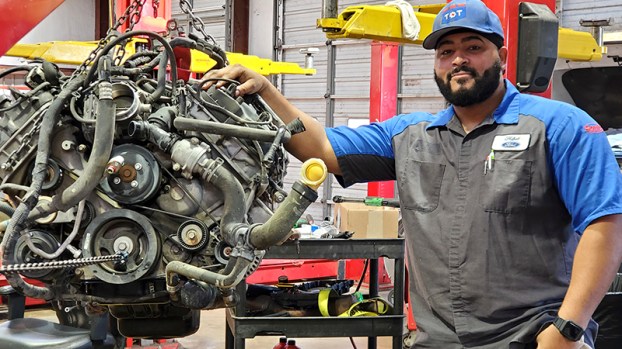 U.S. Army Specialist Nataneal Rodriguez poses by a Ford V-8 engine he is working on at Philpott Ford. The dealership is sponsoring two soldiers with free training and a job after they transition out of the military. (Mary Meaux/The News)

See how U.S. soldiers are training in Nederland for life after military service

NEDERLAND —Two Fort Hood soldiers are preparing for their future after the military thanks to a partnership that took them to Nederland.

The effort is part of a program that links the U.S. Army, Texas Ford Dealers, Workforce Solutions of Central Texas and Philpott Ford.

They spend five days per month at the local dealership getting hands-on experience and after graduating will be Ford certified technicians.

And they will have a job at Philpott waiting for them once they are honorably discharged.

Rodriguez, 27, of Puerto Rico, and Witzke, 24, of Oklahoma, are nearing completion of their time in the military, so the idea of finding a job after the Army is important. 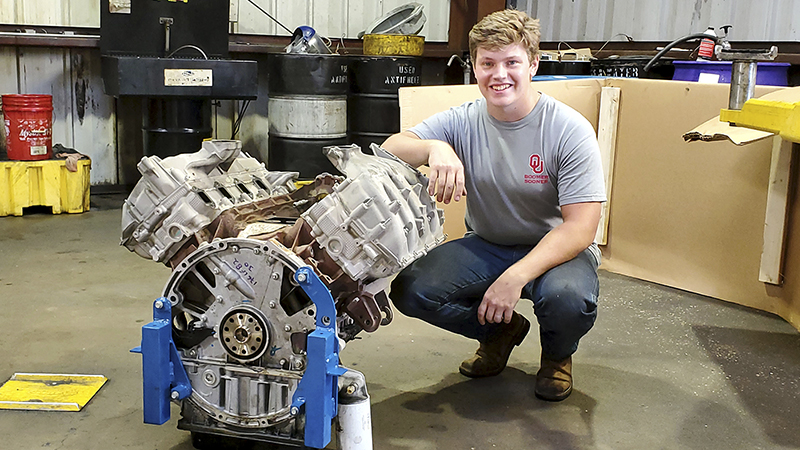 U.S. Army Specialist Will Witzke poses next to a Ford 6.7 power stroke diesel engine he removed from a truck — the new engine already installed at Philpott Ford. (Mary Meaux/The News)

Ford offers that security, they both said.

Rodriguez joked “this isn’t my first rodeo,” meaning he had a job before the Army. He also said in the Army he gets paid on the first and 15th but when he leaves the military, those automatic paychecks won’t be there.

The soldiers are working alongside a senior certified mechanic, helping them establish connections. They will also be working at Philpott after they are discharged, Witzke said.

“I grew up in the garage with my dad around engines,” Witzke said. “Part of the reason I chose diesel (mechanic in the Army) is because I had amateur experience at home. Now I will have professional experience.”

Philpott in Nederland is one of three Texas dealerships participating in the program, allowing soldiers the opportunity to receive free training and a job when they transition into the workforce, Rob Beaird with Ford Communications-Texas said.

Philpott is covering hotel lodging while the soldiers are training a the dealership.

Daren Granger, general manager of Philpott, said they will continue to work with the program after Rodriguez and Witzke compete training.

“These two guys who came in are like home with us,” Granger said of how the employees are like family. “They have done a phenomenal job, and I’m very, very proud to have them and proud to be part of the program.”

Granger is pleased to give the soldiers an opportunity to expand their training and become certified.

“They (military) does so much for us as a population, protecting us and serving us. We owe it to them,” he said, adding being able to help them warms his heart.