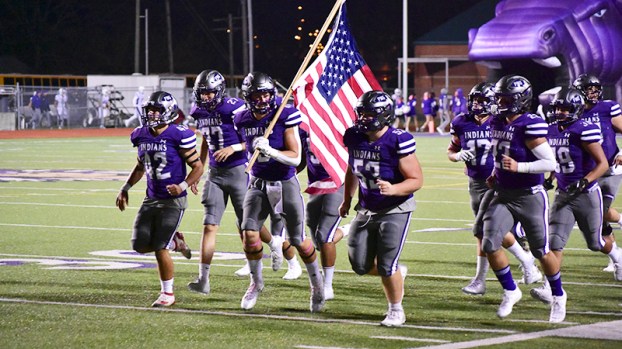 PORT NECHES — With a share of the District 12-5A Division II title still in their grasp, the Port Neches-Groves Indians head to Crosby in a true test of strength on strength.

A win against the Cougars puts the Indians in position for a share of the district title.

“(My message to the team has been to) go compete,” PNG head coach Brandon Faircloth said. “They are in first place and we are in second. Let’s go compete. Let’s go fight. Let’s go be relentless and let’s go find a way.”

PNG enters the game with the district’s most potent offense, which leads in passing and rushing categories. Crosby is second in both categories.

PNG senior quarterback Blake Bost, who is coming off a performance where he accounted for seven touchdowns, leads the district, by a fair amount, in completions (137), attempts (238), passing yards (1,668) and passing touchdowns (18).

Bost was named the Built Ford Tough Player of the Week for his performance against Kingwood Park last week.

While the quarterback has been careful with the ball, throwing only three interceptions on the year, he will have to be extra cautious throwing against a Cougar defense that has forced a district-high seven picks on the season.

“They are a good team,” Bost said. “I just have to take what they give me and find the open guys and we will be fine.”

PNG is tied for the best turnover ratio with plus-3. The game could come down to PNG not making the crucial mistakes that plagued them in last year’s 13-7 loss to the Cougars. The Indians turned the ball over four times with one fumble being returned for six.

“They are a great team,” Faircloth said. “They do a great job of breaking on the ball. We will have to do a great job on offense of taking what they give us and protecting the football. Field position will be really important as well.”

Crosby senior quarterback Reggie Branch leads the Cougars rushing attack with 674 yards and seven TDs. He also leads the district in yards per carry with 8.3.

Faircloth said he hopes the recent resurgence of the PNG run game, led by running back Lance Vaughn, eases some of the workload for Bost, who is also second in the district with 102 carries.

“We always have designed quarterback runs,” Faircloth said. “Depending on the situation, we will still go to them. I am very proud of our offensive line, Coach (Charlie) Feller, Coach (Peter) Medlock. They have gotten those guys to jell really well together. Lance, Dejaunte (Conner) and Blake have been the beneficiaries. They have played well and had great practices. We are really proud of how they have played these past couple of weeks.”

Police in Port Arthur have identified a person of interest in a shooting that left a man with several gunshot... read more