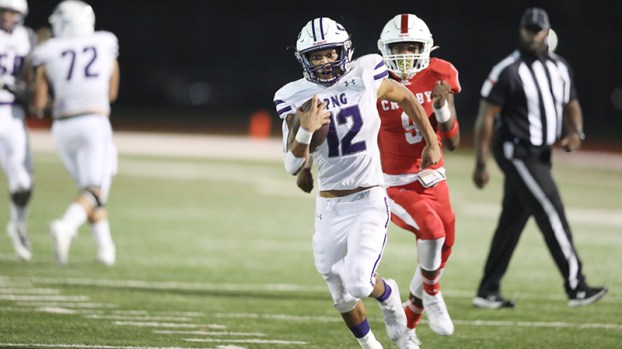 Dejaunte Conner of PNG sprints for a big run against Crosby on Friday. (Leo Weeks Photographers) 11-20-20

CROSBY – Senior running back Dejaunte Conner was one of the few bright spots for Port Neches-Groves, but it was the two-headed monster of quarterback Reggie Branch and running back Deniquez Dunn that led Crosby to a convincing 54-14 in District 12-5A Division II action Friday night at Cougar Stadium.

Leading 30-7 to start the third quarter, Crosby took the second half kickoff and needed just two plays to put another touchdown on the board. Branch hit Kameron Kirkwood for 14 yards and Dunn broke through the middle of the line for a 64-yard TD run to push the lead to 37-7. Dunn had a big night, rushing for 89 yards and 1 TD and catching eight passes for 146 yards and 3 TDs.

It was more of the same for the Cougars in the rest of the game. Kirkwood hauled in a 16-yard TD pass from Branch to extend the lead to 44-7. Branch completed 17 of 32 passes for 306 yards and four TDs. He also added 126 yards on 19 carries.

Trevor Helburg, who was a perfect 4-for-4 in field goal attempts, connected on a 35-yard FG to open the fourth quarter scoring. Crosby’s Irvin Paige recovered a fumble in the end zone on the ensuing kickoff to push the lead to 54-7.

Crosby (6-2, 5-0) put the game’s first points on the board on its opening drive . Branch hit Dunn on a 27-yard completion to put the ball at the PNG 30. The Indians defense stiffened and held the Cougars to a 35-yard field goal by Helburg.

The Cougars defense flexed some muscle on the Indians’ next drive. Bost was sacked twice and PNG was forced to punt, which was blocked and gave Crosby the ball at the Indians 21.

It did not take long for the Cougars to capitalize. Following a 1-yard run by Dunn, Branch hit Dunn on a 21-yard scoring strike to push the lead to 10-0 with 8:10 left in the first quarter.

Bost hit Brady Nail for a 51-yard completion on PNG’s first play on the ensuing drive. Bost was called for intentional grounding to stall the drive and force a Bost quick kick to the Crosby 20.

Crosby’s Jonathan Fuselier intercepted Bost, and the Cougars struck again on another scoring strike from Branch to Dunn, this time from 22-yards to push the lead to 17-0 with 8:36 left in the second quarter.