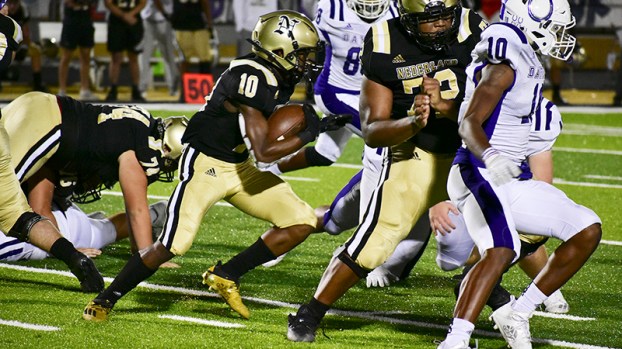 Josh Mazyck of Nederland ran for three touchdowns in a win over Dayton. (I.C. Murrell/The News) 11-13-20

NEDERLAND — With one district loss on the season, the Nederland Bulldogs still control their own destiny when it comes to having a shot at the District 12-5A Division II title.

In order to maintain that control, the Bulldogs will square off against Barbers Hill, who beat Nederland 40-14 last year.

“We know what happened last year,” Nederland head coach Monte Barrow said. “The guys that played in that game haven’t forgotten that. It’s a different team with us, but still, that was a tough loss for us last year with the way we lost. We have to go to work and make sure we are doing what we do best and not worry about last year.”

Barrow said he and his team are well aware that at least a share of a district title is still in their hands and that a win could make a season finale showdown against top-ranked Crosby a game for the district.

“This is one of those games where you can’t go to two losses,” Barrow said. “You also don’t want to put your playoff fate in someone else’s hands. A district title was the goal at the beginning of the season and it is a goal that is still attainable. In order to get there, you have to take care of business this week.”

“The quarterback run is a lot of what they did last year,” Barrow said. “It’s a different quarterback this year, but he is a very, very capable runner. He is a big kid, but has some speed. They are good up front, too… All of the teams are good at controlling the ball, but it starts with stopping the run.”

The Bulldogs proved their rush defense against Texas City. In the game, the Bulldogs held the, then, district-leading rusher Semaj McCall to 77 yards rushing.

The Bulldogs could find success on defense if Holdren is forced to pass. He leads the district in interceptions with seven compared to his eight touchdowns.

The Eagles’ greatest strength is the district’s second-rated defense, which allows 310 yards per game. They will have to hold the district’s leading rusher in Nederland running back Josh Mazyck, who has 781 yards and 12 touchdowns.

“They are sound and well coached,” Barrow said of Barbers Hill. “They fly to the ball really well.”

The game could come down to the turnover margin. Barbers Hill has the worst turnover ratio with minus-10, while the Bulldogs are tied for first in the district with plus-3.

The 1950s were very good to Nederland native Buddy Davis. After building an All-Southwest Conference basketball career and winning an... read more