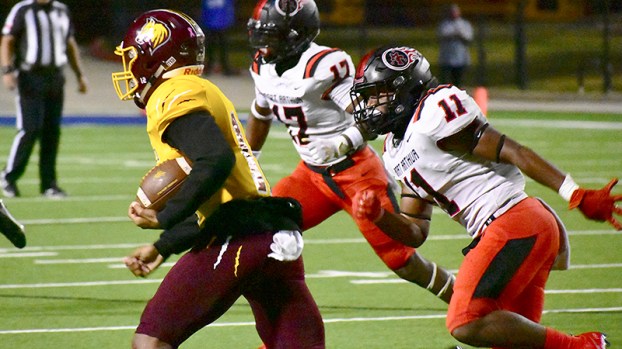 Memorial head coach Brian Morgan said he had no other option than to kick one of his most best, most dedicated players out of practice multiple times in the past two seasons because he hit teammates too hard.

Junior linebacker Jayden Fisher still smirks when asked about his tenacity at practice.

“I got kicked out a couple of times this year, too,” he said smiling. “I love that. We cool, but when we have those shoulder pads on and different color jerseys, it’s different.”

Morgan said he had to tell Fisher that the coaches were aware he can hit.

“He practices full speed,” Morgan said of Fisher. “It’s the only way he knows. He strikes you. I kicked him out of practice multiple times as a sophomore. I told him to ease up and he has learned. We still give him a hard time because he will ease up and then look at us and I tell him ‘I know you would’ve hit him.’”

Morgan said Fisher’s dedication and intelligence are his best attributes.

“He watches so much film,” Morgan said. “It’s unbelievable how much film he watches. He is able to communicate to his teammates what we need to be doing. If something happens on the field, he is able to come to the sideline and tell us what he is seeing that wasn’t on film.”

Morgan said as of Monday afternoon, Fisher had already watched four hours of film on the next opponent.

“By the end of the week, he will be at more than 10 hours,” Morgan said. “He’s at four-and-a-half from over the weekend. Most of your coaches are at seven or eight hours.”

Fisher’s best attributes were on display on a crucial play against Baytown Lee. With the game tied coming out of halftime, the Titans turned the ball over, giving the Ganders a chance to take the lead.

Fisher and the Titans defense had other plans.

On third down, Fisher shot a gap, striking the quarterback and causing the ball to pop out, fly into the air and into the arms of defensive lineman Jordon Thomas.

That was Fisher’s ninth sack of the year.

“I was supposed to drop, but I read that he was about to step up into the pocket and when he did, I just shot the gap,” Fisher said.

He did not know he had jarred the ball free until he got up and saw his teammate with the ball. The Memorial offense scored a touchdown three plays later en route to 28 unanswered points in the second half.

He said Fisher is one of the vocal leaders on defense. On top of calling out what he sees on the field, he is also the player getting his teammates hyped up.

Even though the Titans (7-0, 5-0 in District 9-5A Division I) are undefeated this year, fans of the team can also look forward to seeing more from the dominant defense next year with Fisher being a junior and co-middle linebacker Darrell Thornton being a sophomore.

“Next year, we are going up,” Fisher said.

The 1950s were very good to Nederland native Buddy Davis. After building an All-Southwest Conference basketball career and winning an... read more