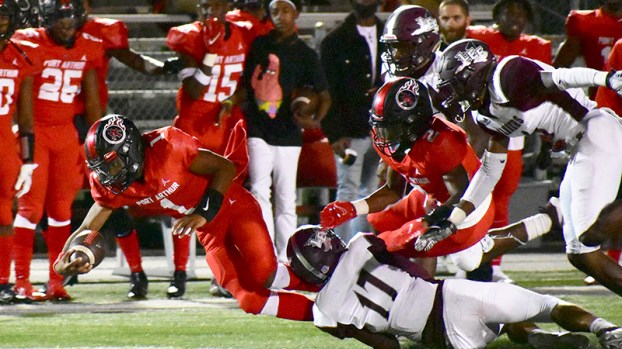 A second-half surge lifted the Memorial Titans as they defeated the Baytown Lee Ganders 48-28 at Memorial Stadium Friday.

“I didn’t have to tell them a whole lot (at halftime),” Memorial head coach Brian Morgan said of his team. “We had a little lull there at the end of the half on both sides of the ball. They hit us on two passes that we really should’ve covered. Offensively, we had a couple of breakdowns in coverages. At halftime, they were very responsive. We played a couple of close games this year and were in some tough ones early. Guys just played hard for four quarters. That is a good football team. They can score points.”

The start seemed to go the way of the most recent Titans games. Memorial’s defense held the Ganders to three-and-outs on their first two drives, while the Titans offense drove the field with relative ease on their opening drive, converting five first downs with five plays of at least 10 yards.

Quarterback Jah’mar Sanders found the end zone on an 8-yard run to give Memorial a 7-0 lead early in the first quarter. 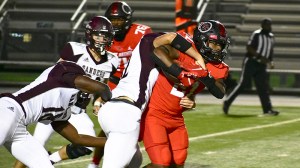 After the struggling Memorial offense was forced to punt, junior cornerback Jaylon Guilbeau picked off a deep pass to give the Titans the ball on their own 15.

That appeared to be the spark the offense needed. Sanders led the Titans on a nine-play drive that was capped off with a 7-yard pass from Sanders to senior running back Branden Chaney.

The usually lethal passing game missed some opportunities in the first half. Sanders failed to connect with an open Tony Brooks, which would’ve put the Titans in the red zone. On their last drive of the half, Sanders under threw a wide-open Tyrence Augusta, who tried to come back for the ball only for it to bounce off his helmet before falling harmlessly to the turf.

The Titans’ first drive of the second half ended when Sanders threw an interception into the end zone. Three plays later the defense would gift wrap the ball back to the offense when senior defensive tackle Donaven Jackson hit Lee quarterback Christian Olige, which forced a fumble that senior defensive end Jordon Thomas recovered on the Lee 14.

“That was huge,” Morgan said. “We talk about complimentary football all of the time. They now are playing for each other. The defense gets a stop and gives the offense momentum. Momentum in football is hard to explain, but when you have the crowd going, the kids are confident. It’s hard to stop them when that is going.”

The secondary for the Titans. Outside of the two blown coverages, the group did not allow much. The secondary got two picks (one by Guilbeau and one by defensive back Elton Anderson on Lee’s final drive) and only allowed 154 yards through the air.

Despite the slow start for Sanders, the quarterback finished with 401 total yards of offense (111 rushing and 290 throwing) and three touchdowns. Sanders found receiver Ilijah Williams for a 65-yard strike with 10:59 left in the game to give the Titans a 35-14 lead. Hayward finished the game with 144 yards receiving and two rushing touchdowns.

“Jah’mar Sanders shows week in and week out that he is one of the best players on the field,” Morgan said. “He is just a tough dude. The rest of the team believes in him. The touchdown on the goal line, he called that play. We called something else and he changed it up there and made a tough run. Everyone has a lot of faith in him and we are glad to have him.”

Chaney added 108 yards on 15 carries and a rushing TD.

The Titans will travel to Baytown to face the Sterling Mustangs at 7 p.m. Friday. Baytown Lee will be back in Southeast Texas taking on Beaumont United at 7 p.m. Thursday.