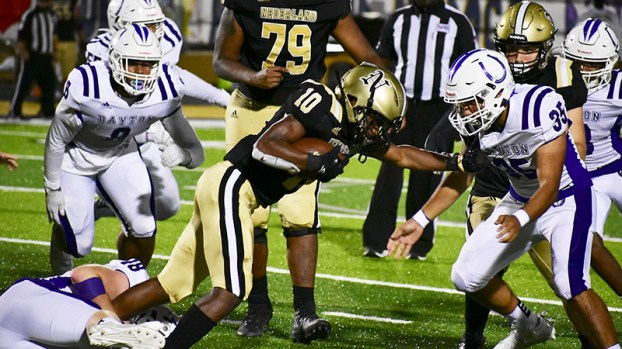 NEDERLAND — Josh Mazyck ran for 167 yards and three touchdowns while Rene Cunningham threw for 231 yards and two touchdowns as the Nederland Bulldogs outscored the pesky Dayton Broncos 42-29 in a District 12-5A Division II game Friday night.

The teams combined for 991 yards in a game that resembled a track meet on the new artificial turf at Bulldog Stadium. Dayton had 520 of those yards, as the Broncos (0-7, 0-3 district) made things uncomfortable for the Bulldogs (4-3, 3-1).

The teams raced up and down the field over the first two quarters, piling up 706 yards of total offense, with Dayton accumulating 388 yards, with Nederland piling up 318 yards. 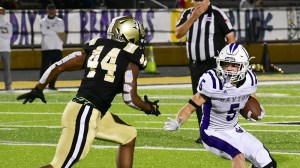 The visiting Broncos stunned the Senior Night crowd into silence early in the game, taking a 7-0 lead just 2:47 into the game on a 24-yard pass from Blayne Denton to Davin Lee. Hernando Andrade Perez tacked on the extra point. Dayton boosted its lead to 13-0 with 4:28 remaining in the first quarter on a 1-yard run by Daveon Washington. Perez missed the PAT.

The Bulldogs got on the board 44 seconds later as Mazyck scored on a 60-yard run. Payne Barrow added the PAT as Nederland trailed 13-7 after the opening period.

“We talked all week about being focused and not being the team that would make the season for Dayton,” Nederland coach Monte Barrow said. “They’re going to get that win. They did some things in the first half that we hadn’t seen on video. We were able to make the adjustments we needed to at halftime.”

Nederland appeared to take control in the second quarter as touchdowns by Mazyck on a 28-yard run and Kyndon Fuselier on a 46-yard pass from Rene Cunningham gave the Bulldogs a 21-13 lead with 1:07 left in the half. Fuselier broke several tackles as he bulled his way into the end zone for the score.

“Kyndon’s a special player,” Barrow said of Fuselier. “He has a desire to stay up and not get tackled. He has an incredible amount of determination.”

The Broncos responded by driving the length of the field in the final 67 seconds, scoring on the half’s final play as Denton found Cameron Cooper in the back of the end zone as time expired. Dayton’s two-point conversion attempt failed as Nederland took a 21-19 lead into the locker room.

“Every game is important the rest of the way, and they’ll only get tougher,” Barrow said. “We’re not only fighting for a district championship, we’re fighting to get into the playoffs.”

Cunningham hit Kyndon Fuselier with a 29-yard TD pass less than two minutes into the third quarter to take the momentum away from the Broncos, who had cut the Nederland lead to 21-19 at the end of the first half.

Fuselier, who caught seven passes for 168 yards and two touchdowns. Fuselier’s TD in the first half was a thing of beauty as he seemingly carried half of the Dayton defense on his back as he fought his way into the end zone.

The Bulldogs are at Barbers Hill to take on the Eagles in a district game at 7:30 p.m. Friday before returning to Bulldog Stadium for the home finale against Kingwood Park at 7:30 p.m. Nov. 27.