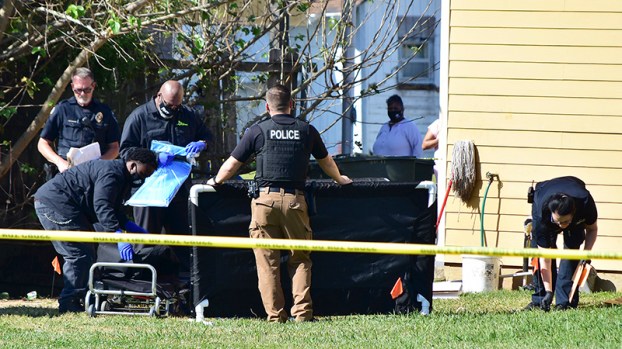 Port Arthur Police officers prepare to cart a dead body away from the backyard of a home on Gulfway Drive Thursday morning. (I.C. Murrell/The News) 11-12-20

The death of a man found on Thursday in the backyard of a Port Arthur home does not appear to be due to foul play, officials said.

Port Arthur Police Det. Sadie Guedry said investigators do not suspect foul play but the case is under investigation.

The name of the deceased is being withheld pending notification of next of kin, she said.

Jefferson County Precinct 7 Justice of the Peace Brad Burnett also said the death does not appear to be due to foul play but has ordered an autopsy. He expects the autopsy to be performed on Friday.

Burnett said the male was face down when found in the backyard of a residence.

PAPD responded to the scene about 10:15 a.m. Thursday in the 2200 block of Gulfway Drive near the intersection with Bluebonnet Avenue.

The Port Arthur Economic Development Corporation awarded a conditional grant to a company establishing a Korean barbecue restaurant next to... read more